What are Fibonacci correction levels?

In order for us to form the support and resistance using Fibonacci calculation we need to have a corrective price movement, a price increase after a fall and/or likewise a price drop after its rise. With the help of Fibonacci correction levels, we can determine further targets for growth or fall in price.

How are Fibonacci correction levels calculated?

Imagine that the price of an asset rose from $100 to $200. In our case this will be the main trend. Now, the price is starting to decline. The upward movement of $100 is regarded as 100%. This segment is then divided according to the “golden ration”. For what purpose? Because, these divided segments provide an excellent opportunity to determine support and resistance levels.

Why is the 50% correction level so important? The most important rule of trading

The most important levels of correction, aside from 50%

The most important Fibonacci levels of correction are 38.2% and 61.8%. It is at these levels that we may most often expect that the price will stop or even possibly reverse.

Using the “Fibonacci Levels of Correction”

Actually, it is not necessary to make constant calculations for Fibonacci correction levels as we showed you earlier. Now days, majority of trading platforms that provide access to real-time asset quotes have the “Fibonacci levels of correction” or “Fib retracement” instrument available within the platform. All that’s left to do, is to determine the main trend and correction in relation to it. Here is where many traders get confused, how to choose the first (starting) point…?

Let’s take a closer look. Often, when a price is moving up or down for a prolonged period of time, the price forms peaks (maximums or highs) and drops (minimums or lows) which can be considered as first (starting) points.

There is no strict rule here. For example, let’s consider different time frames.

What to do after selecting the first (starting) point? 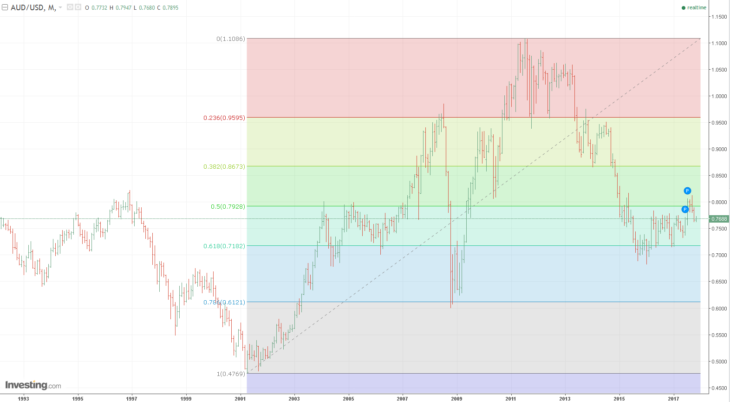 Which Time Frame is best suitable for Fibonacci correction levels?

Any TF. Fibonacci correction levels will work on any time frame that you choose. However, it should be noted that most technical analysts do not recommend going below the 1H TF, because the price becomes more susceptible to the so called “market noise” and random movement that can not be predicted.

What to do after building the Fibonacci correction levels?

Now you have an excellent tool to predict further price movement targets. To get more in-depth information on how to properly choose and build the Fibonacci correction levels we recommend for you to watch our webinars and master class videos.

Bitcoin is the lame duck of the crypto market. Bitcoin was down 0.8% on Tuesday, ending the
Bitcoin loses strength due to the stock sell-off. Bitcoin was down 7.4% on Monday, ending at
Bitcoin and Gold Prices Diverge Again, Extending 5-Month Correlation. Bitcoin is again feeling the pull of gravity
Markets roll back after last week decline, EURUSD tests the important resistanceWhat is crypto-currency in simple words?How to make money OUT of crypto-currency?How to earn bitcoin?What is bitcoin in simple words?How to buy a bitcoin?
Economic calendar / Tuesday 07 / February / 11:56pm