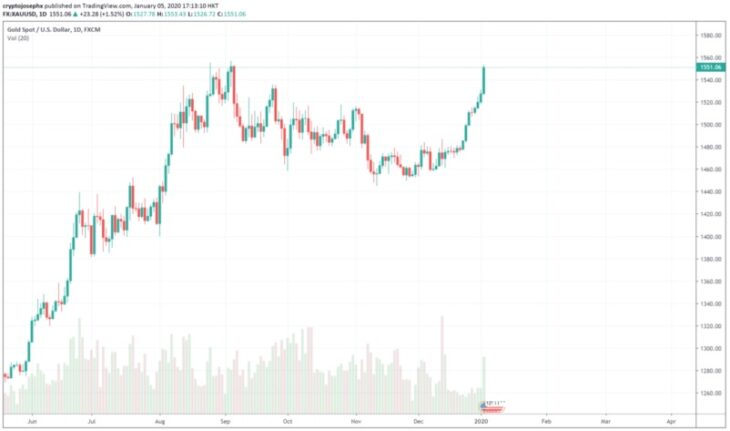 According to Peter Schiff, a prominent gold investor and CEO at Euro Pacific Capital, geopolitical risks remained the biggest factor for gold’s abrupt rise over the past week. Following the assassination of the Iranian general Qassem Suleimani by the U.S., oil price spiked as financial markets trembled, triggering the gold price to increase.

To a broader base of investors, gold and real estate are considered to be two major “real assets” or physical assets. Hence, when either one of the two underperforms, the other tends to see an increase in value. Possibly because of the record high stock market and the rise in the inflow of money into stocks, the U.S. real estate market has not met the expectations of analysts in the final month of 2019.

Although analysts anticipated the price of gold to react with a firm rally following the crisis in the Middle East, the magnitude of its upside movement has surprised investors. The $1,550 level has served as a particularly heavy resistance level since 2013 and a clean break above it would position gold for a new rally in the first half of 2020. To put into perspective, if the gold price cleanly surpasses $1,550 and it becomes a support level, the next resistance levels are found at $1,800 and $1,900. Gold, depending on how the price reacts over the next several weeks, could be en route to testing 2011 levels as long as it is not met with a steep sell-off in January.

Oil Under the Gun Again. On Monday morning, a barrel of Brent is
Euro Completely Recovered Its February Losses. On Monday, March 2nd, the major currency pair
How long to the parity for EURUSD?. EURUSD price is continuing to decrease. The last
Correctional Rebound in Oil Died DownGPBUSD: chance of a drop is still thereGold Stopped GrowingBrent oil price to drop down to $50Pound Handled the Brexit with DignityUSDCAD rises to 7-week high above 1.3200
Quotes / Sun 18 / April / 06:02pm

Bitcoin and Gold Prices Diverge Again, Extending 5-Month Correlation. Bitcoin is again feeling the pull of gravity
Markets roll back after last week decline, EURUSD tests the important resistance. Market focus Holidays in the U. S. and
What is crypto-currency in simple words?.   Crypto-currency is electronic virtual or digital money.
How to make money OUT of crypto-currency?How to earn bitcoin?What is bitcoin in simple words?How to buy a bitcoin?
Economic calendar / Sunday 18 / April / 09:02pm