AUDUSD extends winning streak but rally at risk of being overstretched

AUDUSD surged to a 5-month high of 0.6954 on Friday as the pair looked set to post a seventh straight session of gains. However, although the technical indicators suggest there’s plenty of positive momentum remaining to sustain the rally, there are some signs that the pair is in danger of becoming overbought. 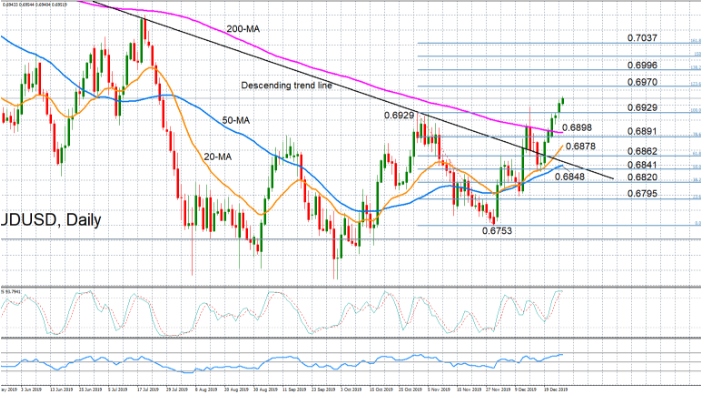 The RSI continues to rise and has yet to enter the overbought region, indicating there’s scope for more gains in the near term. But the stochastics are already in overbought territory and the %K line is ready to cross below the %D line, signalling a possible downside correction, or at least, some easing in the upside momentum in the coming days.

However, if the AUDUSD rally loses some steam, prices may initially retreat towards the October swing high of 0.6929 before reaching for the 200-day moving average (MA), which is flatlining just below the 0.69 handle. Slipping below the 200-day MA would weaken the bullish short-term bias and bring the 20- and 50-day MAs, at 0.6878 and 0.6848 respectively, into range.

In the medium term, the pair seems to be shifting to a bullish outlook, having recently broken above its descending trend line and achieved a third higher high since September with the latest upswing.

Oil Under the Gun Again. On Monday morning, a barrel of Brent is
Euro Completely Recovered Its February Losses. On Monday, March 2nd, the major currency pair
How long to the parity for EURUSD?. EURUSD price is continuing to decrease. The last
Correctional Rebound in Oil Died DownGPBUSD: chance of a drop is still thereGold Stopped GrowingBrent oil price to drop down to $50Pound Handled the Brexit with DignityUSDCAD rises to 7-week high above 1.3200
Quotes / Sun 18 / April / 04:58pm

Bitcoin and Gold Prices Diverge Again, Extending 5-Month Correlation. Bitcoin is again feeling the pull of gravity
Markets roll back after last week decline, EURUSD tests the important resistance. Market focus Holidays in the U. S. and
What is crypto-currency in simple words?.   Crypto-currency is electronic virtual or digital money.
How to make money OUT of crypto-currency?How to earn bitcoin?What is bitcoin in simple words?How to buy a bitcoin?
Economic calendar / Sunday 18 / April / 07:58pm