AUDUSD found a strong resistance obstacle on the six-month high of 0.7030 on December 31 and subsequently completed four consecutive red days. 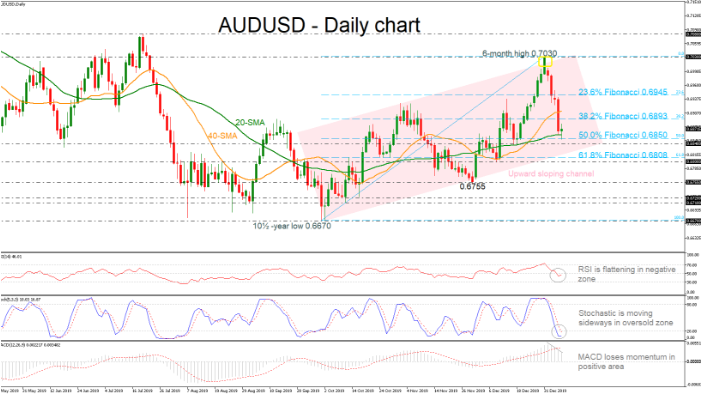 The price dropped towards the 20-day simple moving average (SMA) and the 50.0% Fibonacci retracement level of the upleg from 0.6670 to 0.7030, near 0.6850. Furthermore, the pair remains within the upward sloping channel, created from the bottom on October 1.

Looking at the technical indicators, the RSI and the stochastic seem to be flat in the negative zone, suggesting the end of the downward move, however, the MACD is still losing momentum, indicating further downside move below the 50.0% Fibo (0.6850).

Should weakness extend lower, support could be initially come from the nearby level of 0.6840 before slipping towards the 61.8% Fibonacci mark of 0.6808 and the 0.6800 handle. Clearing this zone, the next stop could be around the 0.6755 barrier, taken from the trough on November 29, penetrating the pattern to the downside and signalling the start of a new trend

Summarizing, in the medium-term, if the pair fails to recover some of the previous days’ losses, it may switch the current positive trend to negative.

Oil Under the Gun Again. On Monday morning, a barrel of Brent is
Euro Completely Recovered Its February Losses. On Monday, March 2nd, the major currency pair
How long to the parity for EURUSD?. EURUSD price is continuing to decrease. The last
Correctional Rebound in Oil Died DownGPBUSD: chance of a drop is still thereGold Stopped GrowingBrent oil price to drop down to $50Pound Handled the Brexit with DignityUSDCAD rises to 7-week high above 1.3200
Quotes / Sun 18 / April / 06:13pm

Bitcoin and Gold Prices Diverge Again, Extending 5-Month Correlation. Bitcoin is again feeling the pull of gravity
Markets roll back after last week decline, EURUSD tests the important resistance. Market focus Holidays in the U. S. and
What is crypto-currency in simple words?.   Crypto-currency is electronic virtual or digital money.
How to make money OUT of crypto-currency?How to earn bitcoin?What is bitcoin in simple words?How to buy a bitcoin?
Economic calendar / Sunday 18 / April / 09:13pm