AUDUSD plunged to a fresh three-month low of 0.6736 on Tuesday, creating a bullish doji candle, which is suggesting a possible rebound in the market on the short-term timeframe. 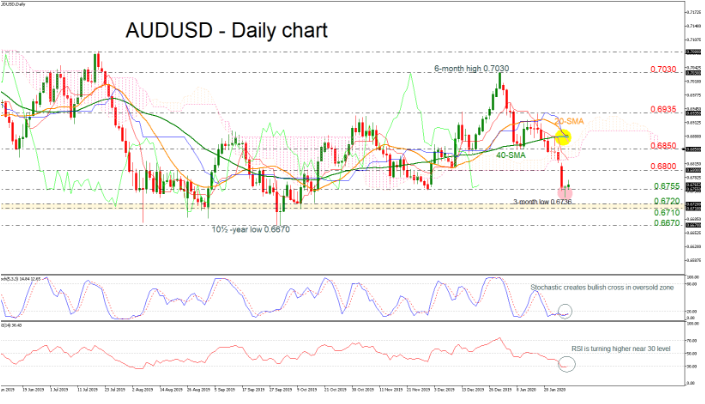 The price is creating a pullback after a ten-day negative run, confirmed by the technical indicators. The stochastic oscillator is turning higher and the %K and the %D lines are posting a bullish crossover in the oversold zone. In addition, the RSI is pointing up marginally above the 30 level.

Significant advances could send prices towards the immediate resistance at the 0.6800 psychological mark, identified by the low on December 10, which is flirting with the lower surface of the Ichimoku cloud. Above this level, the upside move could take the pair until the 0.6850 barrier and the completed bearish crossover within the 20- and 40-period simple moving averages (SMAs) at 0.6878.

Concluding, after the recent bounce off the three-month low, AUDUSD could see some gains in the near term. However, a bullish trend would be created only if there is a daily close above the previous six-month high of 0.7030.

Oil Under the Gun Again. On Monday morning, a barrel of Brent is
Euro Completely Recovered Its February Losses. On Monday, March 2nd, the major currency pair
How long to the parity for EURUSD?. EURUSD price is continuing to decrease. The last
Correctional Rebound in Oil Died DownGPBUSD: chance of a drop is still thereGold Stopped GrowingBrent oil price to drop down to $50Pound Handled the Brexit with DignityUSDCAD rises to 7-week high above 1.3200
Quotes / Fri 26 / February / 10:01pm

Bitcoin and Gold Prices Diverge Again, Extending 5-Month Correlation. Bitcoin is again feeling the pull of gravity
Markets roll back after last week decline, EURUSD tests the important resistance. Market focus Holidays in the U. S. and
What is crypto-currency in simple words?.   Crypto-currency is electronic virtual or digital money.
How to make money OUT of crypto-currency?How to earn bitcoin?What is bitcoin in simple words?How to buy a bitcoin?
Economic calendar / Saturday 27 / February / 01:01am