The day of political reckoning has finally arrived for the United Kingdom. The much-anticipated general election will be held today, and the result will decide what form Brexit takes, whether there’s a second EU referendum, and how much fiscal stimulus will be injected into an economy paralyzed by uncertainty.

Polling stations close at 22:00 GMT and exit polls should be released at roughly the same time, so markets may start moving with those. Official results are expected to begin rolling in at around 02:00 GMT. Be wary that these hours are usually characterized by thin liquidity, a factor that could augment the size of any moves in the pound.

Opinion polls suggest the Conservatives are headed for a majority in Parliament, which would be the most bullish outcome for the pound. It would imply that the Brexit process can finally move forward, alleviating some uncertainty in the short term, even if it also means that the threat of a no-deal Brexit would likely return in late 2020. The most catastrophic outcome may be a hung Parliament, as it could keep the political gridlock going.

It’s important to note that the pound has moved much higher lately as optimism for a Tory majority grew. This means that a Conservative victory is now the market’s baseline scenario. Therefore, if it materializes, the pound could still soar, but any gains may be smaller in magnitude compared to the losses the currency may record on a hung Parliament outcome, as that would catch markets by surprise.

For instance, Cable could approach the $1.35 region if the Tories win as expected, but possibly drop towards the $1.26 area on a hung Parliament scenario, from $1.32 currently. Of course, the size of any majority will also be crucial in determining the scale of the market reaction.

ECB meets, but Lagarde is unlikely to shake markets

Across the English Channel, the European Central Bank will announce its policy decision at 12:45 GMT, followed by a press conference 45 minutes later – the first under President Christine Lagarde. Even though the struggling euro area economy could use some more monetary ‘juice’, no action is expected, partly because the Governing Council is highly divided on the need for further stimulus.

As for the market reaction, it may be a snoozer. Lagarde will probably pick up exactly where Mario Draghi left off and spend her time calling on national governments to launch a fiscal stimulus package to kickstart growth. If anything, more signals that monetary policy is near its limits and that the bar for further rate cuts is high may prove somewhat positive for the euro, though any such gains would likely be modest.

Fed signals no action in 2020, but Powell drags dollar lower

As widely expected, the Fed kept rates unchanged yesterday. The new ‘dot plot’ of interest rate projections signaled a clear consensus for keeping rates unchanged throughout 2020. This stands in sharp contrast to market pricing, where one more quarter-point rate cut is still fully priced in by this time next year.

Yet, the dollar ended lower overall, mostly due to a comment by Chairman Powell. He reiterated – with extra emphasis this time – that he would need to see a “significant” increase in inflation that is “persistent” before he even considers raising rates again. The signal was clear: interest rates can still be cut if anything adverse happens, but the bar for raising them again is extremely high.

Elsewhere, the Swiss National Bank kept its policy unchanged today, providing no fresh signals. The reaction in the franc was thus muted, though the haven currency could see some sharp moves once the US announces whether it will go through with the next round of tariffs– a decision that could come at any moment. 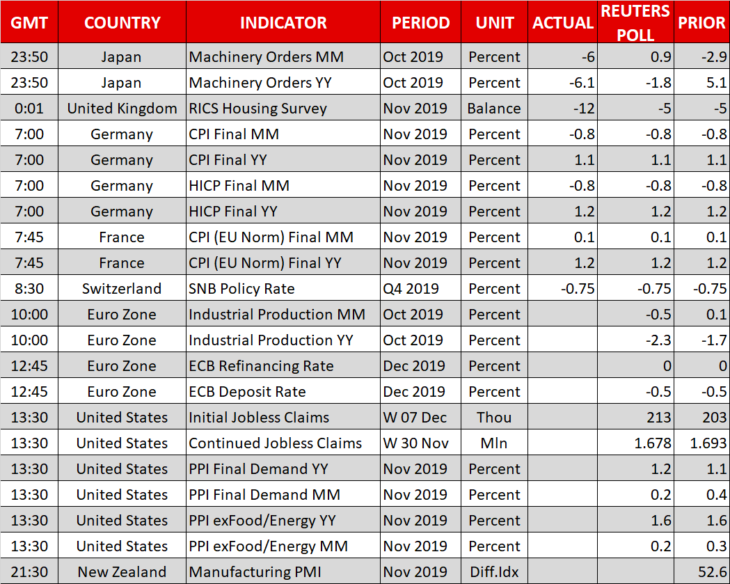 Oil Under the Gun Again. On Monday morning, a barrel of Brent is
Euro Completely Recovered Its February Losses. On Monday, March 2nd, the major currency pair
How long to the parity for EURUSD?. EURUSD price is continuing to decrease. The last
Correctional Rebound in Oil Died DownGPBUSD: chance of a drop is still thereGold Stopped GrowingBrent oil price to drop down to $50Pound Handled the Brexit with DignityUSDCAD rises to 7-week high above 1.3200
Quotes / Mon 19 / April / 03:44am

Bitcoin and Gold Prices Diverge Again, Extending 5-Month Correlation. Bitcoin is again feeling the pull of gravity
Markets roll back after last week decline, EURUSD tests the important resistance. Market focus Holidays in the U. S. and
What is crypto-currency in simple words?.   Crypto-currency is electronic virtual or digital money.
How to make money OUT of crypto-currency?How to earn bitcoin?What is bitcoin in simple words?How to buy a bitcoin?
Economic calendar / Monday 19 / April / 06:44am