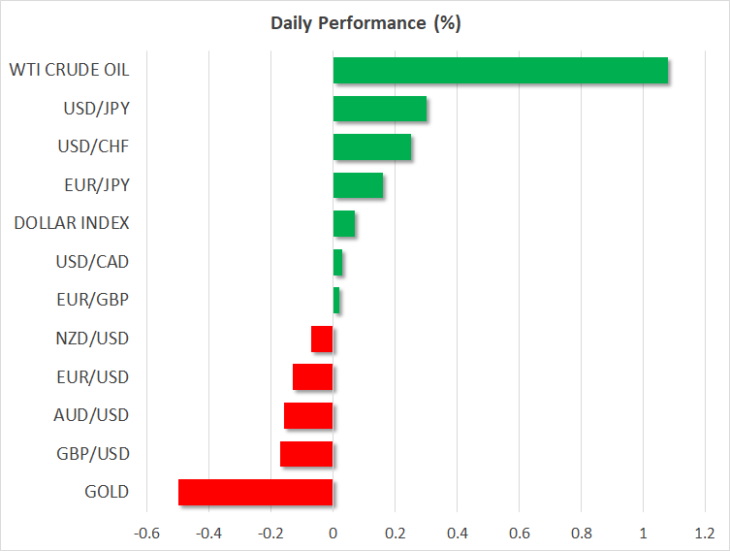 Markets took this as a signal that the Fed will act with force in July and deliver easing that is over and above what is expected, sending the implied probability for a 50bp cut soaring. Accordingly, the dollar fell with US bond yields, as stocks and gold roared higher. Yet, in what seemed like an exercise in damage control, the New York Fed quickly came out to clarify that Williams’ speech was not a signal about July, but an “academic” view instead.

This is what lifted the dollar a little today – though it only retraced less than half of the drop and the probability for a ‘double’ 50bp cut in July now stands at ~43%, from ~35% yesterday. Overall, a 50bp move still seems excessive as the data aren’t weak enough for policymakers to use so much of their limited rate ammunition so early, though this is admittedly becoming a more realistic prospect. For now, comments by the Fed’s Bullard (15:00 GMT) and Rosengren (20:30 GMT) today may be crucial in shaping this narrative.

Crude prices fell on Thursday, albeit not massively, following news that Tehran offered a deal to accept enhanced inspections of its nuclear program if Washington lifts all sanctions. However, the optimism was soon tempered by news that the US Navy shot down an Iranian drone. Moreover, reports suggest that US officials are skeptical of Iran’s offer, and view it as a subtle effort to get sanctions relief without making real concessions.

While the situation remains tense and unpredictable, the fact that Iran is at least trying to explore the diplomatic route is encouraging in itself, and any more signs that tensions are easing could keep oil prices under pressure. Of course, the demand side – and specifically any developments in the US-China trade talks – will also be vital.

Outside of the two Fed speakers, the only noteworthy event today will be the release of retail sales data out of Canada. The loonie has been contained in a narrow range lately, with lower oil prices pushing it down but a weaker US dollar providing counterbalance.

Likewise, while the market probability for a Bank of Canada (BoC) rate cut by December has jumped to ~53%, dollar/loonie continues to trade near its lowest levels this year, as Fed rate-cut expectations have soared by even more. Overall, as long as the Fed-BoC policy divergence narrative holds, the outlook for the loonie remains positive – though a lot will also depend on oil prices.

Oil Under the Gun Again. On Monday morning, a barrel of Brent is
Euro Completely Recovered Its February Losses. On Monday, March 2nd, the major currency pair
How long to the parity for EURUSD?. EURUSD price is continuing to decrease. The last
Correctional Rebound in Oil Died DownGPBUSD: chance of a drop is still thereGold Stopped GrowingBrent oil price to drop down to $50Pound Handled the Brexit with DignityUSDCAD rises to 7-week high above 1.3200
Quotes / Mon 12 / April / 06:55pm

Bitcoin and Gold Prices Diverge Again, Extending 5-Month Correlation. Bitcoin is again feeling the pull of gravity
Markets roll back after last week decline, EURUSD tests the important resistance. Market focus Holidays in the U. S. and
What is crypto-currency in simple words?.   Crypto-currency is electronic virtual or digital money.
How to make money OUT of crypto-currency?How to earn bitcoin?What is bitcoin in simple words?How to buy a bitcoin?
Economic calendar / Monday 12 / April / 09:55pm