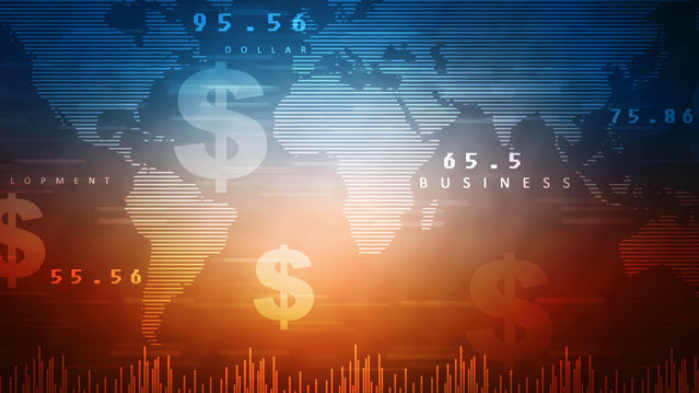 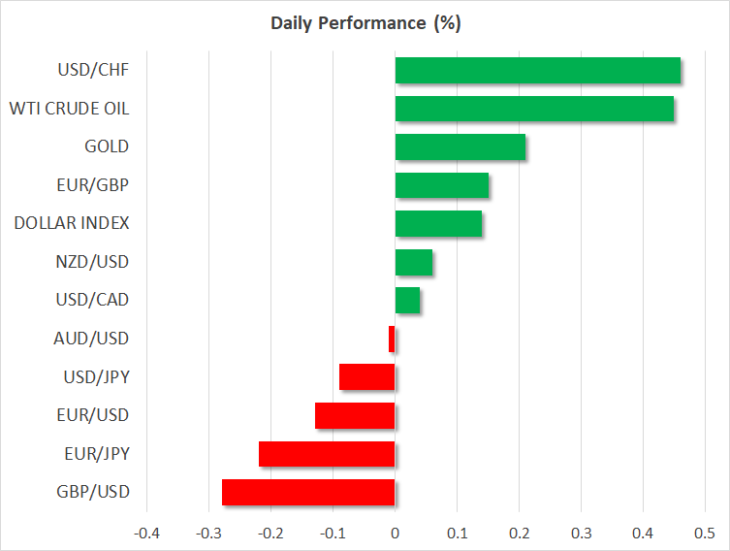 Global markets went into turmoil yesterday, with risk aversion dominating after the US ISM manufacturing PMI unexpectedly dropped to a decade low of 47.8 in September, missing the forecast for a rebound to 50.1. Any reading below 50 suggests the sector is contracting, so the considerable decline in this index implies that the US manufacturing sector is shrinking at an accelerating speed, with export orders in particular taking a massive hit from the trade war.

While manufacturing accounts for a small percentage of output in most G10 economies, typically around 10%, the concern is that if left unchecked this disease may eventually infect the far-larger services sector – much like what we have seen in Europe lately. In other words, concerns that a full-blown recession may be approaching were likely amplified.

Stock markets tanked, with the Dow Jones losing 1.3%, while the dollar fell across the board as the implied probability for another Fed rate cut in October jumped above 60% again. Even after this retreat though, the greenback remains near multi-year highs, which illustrates 1) that there is nowhere else to really hide in the FX spectrum and 2) that investors don’t view this fragility as a game changer for Fed policy yet. On the other hand, the fact that stocks logged considerable losses despite growing expectations for more rate cuts implies that we may be near the point where ‘bad news is no longer good news for stocks’.

Today, the ADP employment report for September will be in focus, as investors look for clues on whether the softness in manufacturing has already started to impact the broader labor market. Likewise, the Fed’s Harker (13:00 GMT) and Williams (14:50 GMT) will deliver remarks, and it will be interesting to see how much weight they attach to the dismal ISM numbers.

Tuesday marked another hectic session for the British pound, which soared initially on reports that the EU is contemplating giving the UK a time limit on the Irish backstop, only to give up those gains after the Commission quickly denied that claim. Separately, the much-anticipated Brexit plan that PM Johnson is going to unveil later today was leaked to the press.

Clearly, this is a non-starter for the Republic of Ireland, whose deputy Prime Minister already described the proposal as “concerning to say the least”. Similarly, the rest of the EU probably won’t be fond of raising border checks between the two Irelands – that is what the backstop was intended to prevent in the first place. For the pound, this implies that a compromise solution is now less likely, adding to the sense that the only sterling-friendly outcome left is a General Election that puts the prospect of a pro-remain government on the table.

Oil Under the Gun Again. On Monday morning, a barrel of Brent is
Euro Completely Recovered Its February Losses. On Monday, March 2nd, the major currency pair
How long to the parity for EURUSD?. EURUSD price is continuing to decrease. The last
Correctional Rebound in Oil Died DownGPBUSD: chance of a drop is still thereGold Stopped GrowingBrent oil price to drop down to $50Pound Handled the Brexit with DignityUSDCAD rises to 7-week high above 1.3200
Quotes / Sun 18 / April / 06:00pm

Bitcoin and Gold Prices Diverge Again, Extending 5-Month Correlation. Bitcoin is again feeling the pull of gravity
Markets roll back after last week decline, EURUSD tests the important resistance. Market focus Holidays in the U. S. and
What is crypto-currency in simple words?.   Crypto-currency is electronic virtual or digital money.
How to make money OUT of crypto-currency?How to earn bitcoin?What is bitcoin in simple words?How to buy a bitcoin?
Economic calendar / Sunday 18 / April / 09:00pm