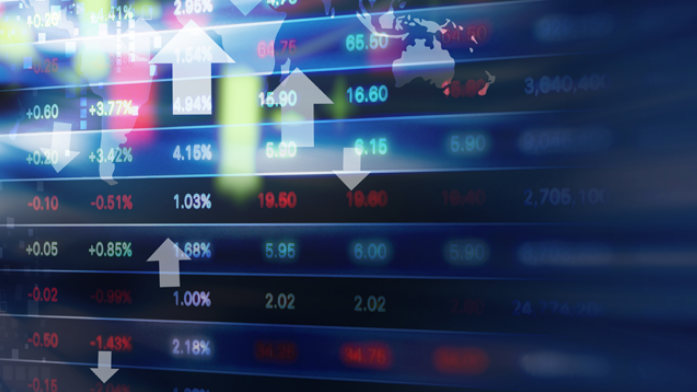 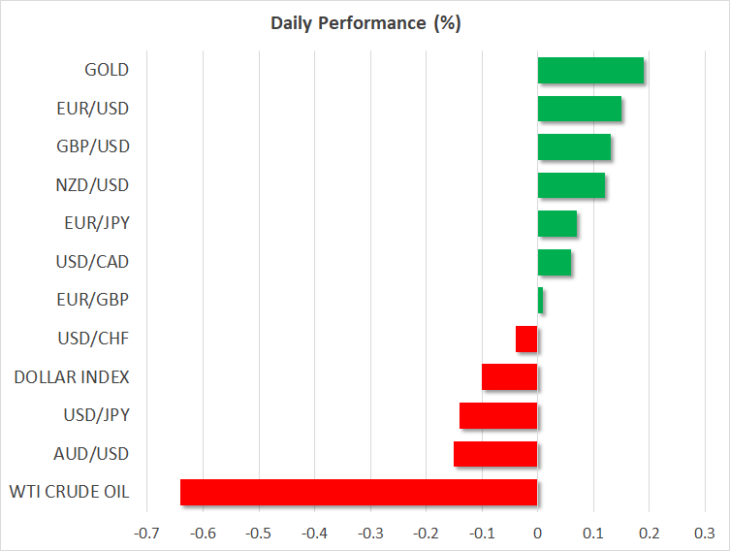 Worries that the American economy may be headed for a recession took a breather yesterday, after the latest batch of US data beat forecasts, sending the dollar higher alongside Treasury yields as traders scaled back bets for further Fed rate cuts next year. The implied probability for a cut by March fell to ~22%. What stood out most was durable goods orders – a proxy for business investment – which unexpectedly jumped, signaling that manufacturers continue to push ahead with expansion plans despite trade uncertainties.

The figures were encouraging enough for the Atlanta Fed to upgrade its GDP tracker for Q4 to an annualized rate of 1.7%, from a meagre 0.4% previously. Naturally, the signs for faster growth propelled Wall Street indices to uncharted heights once again, with the S&P 500 (+0.42%), Dow Jones (+0.15%), and Nasdaq 100 (+0.70%) all closing at new records. Safe havens took the short end of the stick, with the yen and gold surrendering ground as risk appetite grew.

Yet, these moves are retracing a little on Thursday, with futures pointing to a ~0.35% lower open on Wall Street and the yen recouping a small part of its losses, after President Trump signed a bill on Hong Kong into law. The bill effectively supports the democracy movement, and while Trump didn’t have much say in the matter as Congress would probably overturn any veto of his, the move still infuriated Beijing – which vowed swift retaliation.

For the markets, this could complicate the trade talks. Although the two sides have repeatedly said the two issues are separate, it’s clear that everything is on the table when it comes to the negotiations, something made evident by some older comments by Trump that Huawei could be part of any trade deal, for example. While this bill may not be enough to derail the phase one deal, it most certainly doesn’t spell good news for any progress after that.

Pound gets a lift after poll signals clear Tory majority

Overnight, the British currency got a lift from Yougov’s model-based election poll, which showed that Boris Johnson’s Conservatives are on track to secure a comfortable majority in Parliament. This is probably the most bullish outcome for sterling, as it would imply that the Tories can implement their Brexit agenda and pass the renegotiated deal by January, finally allowing the negotiations to move forward.

Admittedly though, investors didn’t get overly excited. Yes, the pound did spike higher, but the move was relatively minor for sterling standards, implying that there’s still a lot of caution in the air. While this model did forecast the 2017 hung parliament accurately, that was also the first year it was launched, so its overall track record is still questionable.

As for Cable, the trading range between $1.30 and 1.2760 may continue to hold as we approach Election Day, though the risks now seem skewed towards a test of the upper boundary next, amid the renewed optimism for a Tory majority.

German inflation eyed as US remains closed for Thanksgiving

The economic calendar is relatively light today, as American markets will remain closed for the Thanksgiving holiday.

In Germany, preliminary inflation data for November are primed for release. As for the speakers, ECB policymakers Coeure (16:35 GMT) and Lane (20:00 GMT) will deliver remarks. 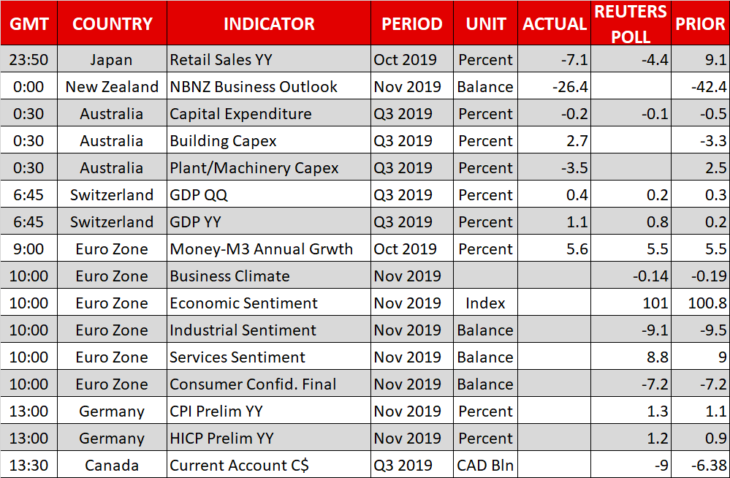 Oil Under the Gun Again. On Monday morning, a barrel of Brent is
Euro Completely Recovered Its February Losses. On Monday, March 2nd, the major currency pair
How long to the parity for EURUSD?. EURUSD price is continuing to decrease. The last
Correctional Rebound in Oil Died DownGPBUSD: chance of a drop is still thereGold Stopped GrowingBrent oil price to drop down to $50Pound Handled the Brexit with DignityUSDCAD rises to 7-week high above 1.3200
Quotes / Mon 12 / April / 07:32pm

Bitcoin and Gold Prices Diverge Again, Extending 5-Month Correlation. Bitcoin is again feeling the pull of gravity
Markets roll back after last week decline, EURUSD tests the important resistance. Market focus Holidays in the U. S. and
What is crypto-currency in simple words?.   Crypto-currency is electronic virtual or digital money.
How to make money OUT of crypto-currency?How to earn bitcoin?What is bitcoin in simple words?How to buy a bitcoin?
Economic calendar / Monday 12 / April / 10:32pm