Dollar and stocks rally in relief after tariff delays 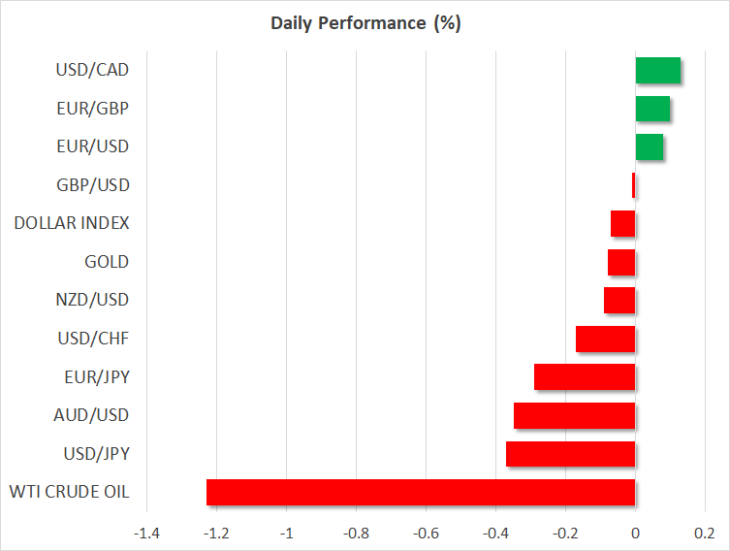 Trump’s tariff delays revive risk appetite, but is this a game changer?

Global risk sentiment came roaring back on Tuesday, with US stock markets closing 1.5% higher and WTI oil gaining 4%, after the Trump administration said it will delay tariffs on several Chinese products until December and exempt some goods altogether. These include mobile phones, laptops, and clothing. Separate news that US and Chinese negotiators talked by phone played into this cheerful narrative, amplifying hopes that the scheduled talks in September may proceed as planned.

Traders were likely blindsided by this conciliatory step as recent signals in the trade war have been anything but encouraging, which explains the sharp market moves, especially in a thin liquidity environment. In the FX spectrum, as one would expect, the Japanese yen was the biggest loser while the aussie was the best performer. The dollar shined too, as bets for an aggressive half-point Fed rate cut in September were scaled back.

Is this a game changer for markets? In a nutshell, not really. While this is a positive development, the exemptions seem calibrated towards softening the impact on American consumers, not extending an olive branch to Beijing. Likewise, although the two sides may well meet in September, the lesson of the past year has been that ‘negotiations’ are not synonymous to ‘progress’. For now, neither party seems willing to make real concessions that could bring a deal closer.

Therefore, this optimism may only be a temporary reprieve in a bigger trend of risk aversion, and in this sense, it wouldn’t be surprising to see the latest market moves reverse before long. The outlook for the yen in particular remains bright, as it could gain both through the risk sentiment channel and via narrowing interest rate differentials, with the Fed and ECB set to ‘outgun’ the BoJ in easing policy.

Indeed, another factor arguing for more frequent waves of risk aversion is the rapidly deteriorating health of the global economy. China’s retail sales and industrial output data for July hit the markets overnight and were very disappointing, with both figures slowing by much more than expected. The weakness confirms that trade uncertainty has really started to inflict damage on the world’s growth engine, despite sizeable stimulus measures by the Chinese authorities.

Consequently, the trade-related optimism has been tempered a little. Investors may be coming to terms with the fact that trade uncertainty is unlikely to dissipate anytime soon, and therefore that more pain may be in store for the world economy, before the situation gets better.

British and European data coming up

It will be a relatively quiet day on the data front, with the highlight being the UK inflation prints for July. However, even in case of robust numbers, any meaningful rebound in the pound seems highly unlikely for now, with a no-deal Brexit becoming an ever more realistic prospect.

In euro land, the second estimate of GDP for Q2 will be in focus.

Liquidity will likely remain thinner than usual, so any piece of news could trigger an outsized market reaction. 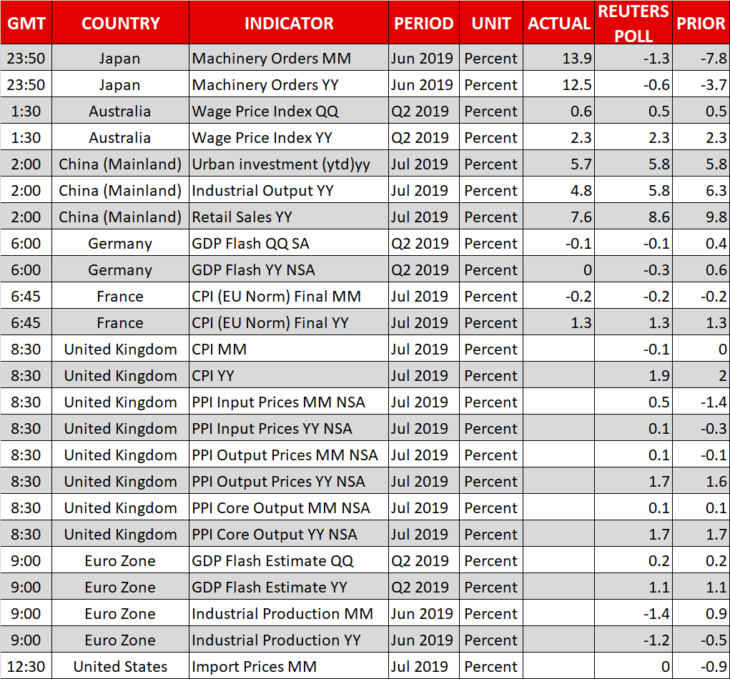 Oil Under the Gun Again. On Monday morning, a barrel of Brent is
Euro Completely Recovered Its February Losses. On Monday, March 2nd, the major currency pair
How long to the parity for EURUSD?. EURUSD price is continuing to decrease. The last
Correctional Rebound in Oil Died DownGPBUSD: chance of a drop is still thereGold Stopped GrowingBrent oil price to drop down to $50Pound Handled the Brexit with DignityUSDCAD rises to 7-week high above 1.3200
Quotes / Sat 17 / April / 05:44am

Bitcoin and Gold Prices Diverge Again, Extending 5-Month Correlation. Bitcoin is again feeling the pull of gravity
Markets roll back after last week decline, EURUSD tests the important resistance. Market focus Holidays in the U. S. and
What is crypto-currency in simple words?.   Crypto-currency is electronic virtual or digital money.
How to make money OUT of crypto-currency?How to earn bitcoin?What is bitcoin in simple words?How to buy a bitcoin?
Economic calendar / Saturday 17 / April / 08:44am