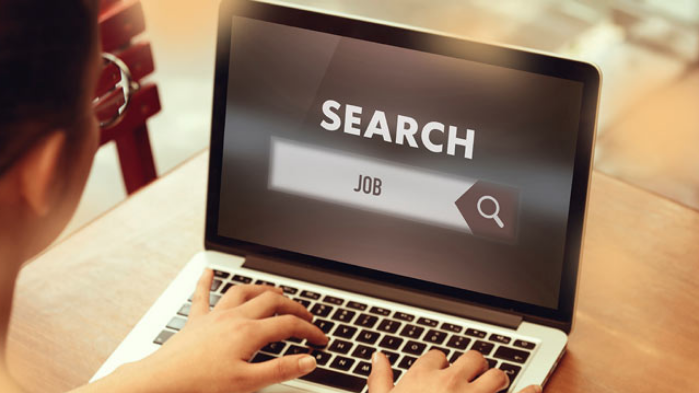 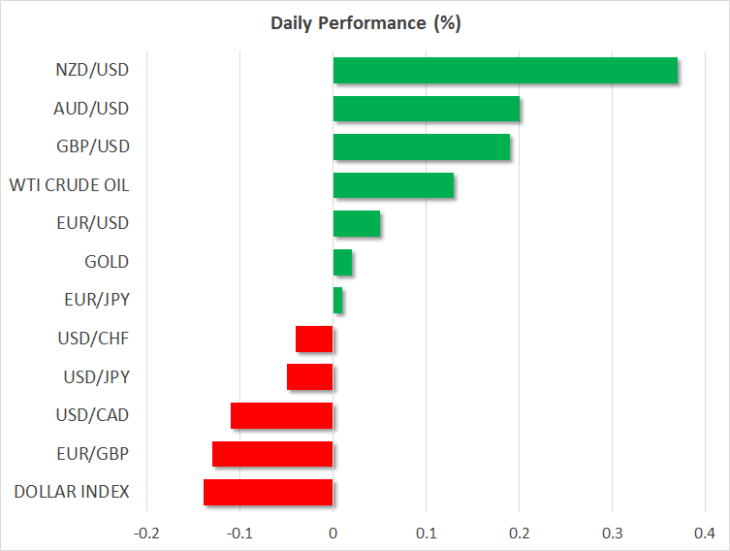 Can US payrolls keep the besieged dollar from stumbling further?

The spotlight today will fall on the US employment report for October, as investors scramble to figure out whether the Fed can truly afford to ‘pause’ its rate-cutting cycle, or whether that is merely wishful thinking. Likewise, the ISM manufacturing PMI for the same month will reveal to what extent the US-China ceasefire calmed nerves among business executives.

Forecasts point to nonfarm payrolls rising by a mere 85k, far less than the 136k in September, though much of this weakness is likely owed to a strike at General Motors during the month – since picketing workers are counted as unemployed. The jobless rate is expected to tick up, albeit from a very low level, while average hourly earnings are forecast to pick up some speed and reach 3.0% in yearly terms, from 2.9% previously.

As for the market reaction, it’s difficult to envisage a significant dollar retreat today even if payrolls disappoint, as any weakness may be blamed – at least partially – on ‘transitory’ factors that the Fed typically looks through. A negative surprise may thus trigger only a mild downside reaction in the currency as it might have little impact on the Fed’s thinking, whereas a positive surprise could be taken as a sign of strength given the subdued expectations and push the dollar much higher.

Risk aversion made a comeback yesterday following reports that Chinese officials doubt they can reach a comprehensive trade deal with the US, even if the ‘phase one’ accord is signed soon. Specifically, Beijing is worried that Trump may go back on even the ‘phase one’ deal if things don’t go his way during the second phase of the talks. The same report suggested China won’t budge on the real issues, which sets the stage for more deadlock and perhaps more escalation.

To be sure, Beijing was never keen on compromising on the real issues, and the recent truce is unlikely to have made the Chinese leadership any more willing to make painful concessions. All in all, this merely confirms that the current ‘ceasefire’ is on thin ice, and that while markets may continue to cheer the ‘mini’ deal in the coming weeks, the prospect of a ‘real’ deal remains as elusive as ever.

In the FX arena, the Japanese yen surged as investors sought the safety of haven assets, while the trade-sensitive aussie underperformed, mirroring the pullback in US stock markets. Things are calmer today, with the Australian currency recovering and futures pointing to a higher open on Wall Street, though whether this serenity is maintained will likely depend on the quality of the upcoming US economic data.

Over in the UK, the manufacturing PMI for October may attract some attention today, but overall, all eyes remain on the election campaign. 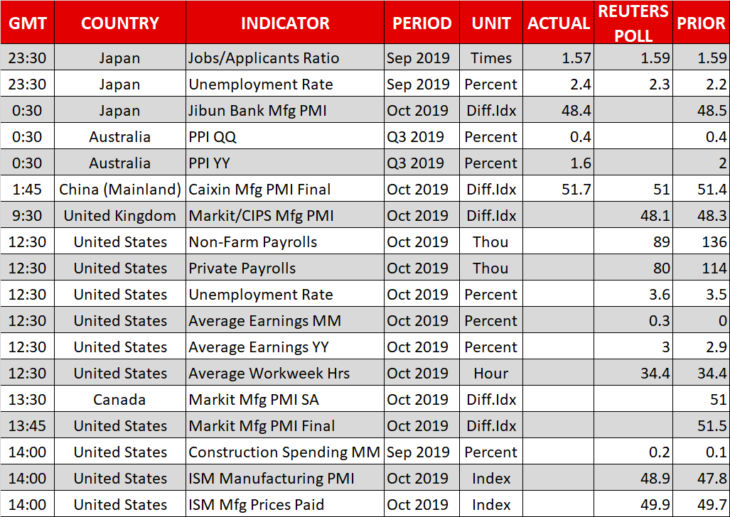 Oil Under the Gun Again. On Monday morning, a barrel of Brent is
Euro Completely Recovered Its February Losses. On Monday, March 2nd, the major currency pair
How long to the parity for EURUSD?. EURUSD price is continuing to decrease. The last
Correctional Rebound in Oil Died DownGPBUSD: chance of a drop is still thereGold Stopped GrowingBrent oil price to drop down to $50Pound Handled the Brexit with DignityUSDCAD rises to 7-week high above 1.3200
Quotes / Sat 17 / April / 06:04am

Bitcoin and Gold Prices Diverge Again, Extending 5-Month Correlation. Bitcoin is again feeling the pull of gravity
Markets roll back after last week decline, EURUSD tests the important resistance. Market focus Holidays in the U. S. and
What is crypto-currency in simple words?.   Crypto-currency is electronic virtual or digital money.
How to make money OUT of crypto-currency?How to earn bitcoin?What is bitcoin in simple words?How to buy a bitcoin?
Economic calendar / Saturday 17 / April / 09:04am