The UK House of Commons gives preliminary approval of the Brexit bill but refused to pass it within three days. This timetable was requested by the Prime Minister, to complete all legislative procedures by October 31. Now, the further passage of the law has stalled until the EU replies with its extension how long the new postponement will last.

Brexit has returned to its normal state: the exit date postponed again, and all scenarios are still possible, although the chances of an exit without a deal are now negligible. 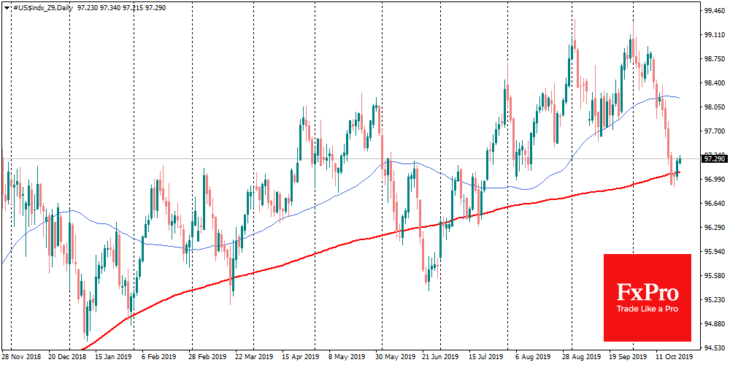 The British government says that if the EU provides a deferral with until January 31, it will be preparing for a new general election. The possibility of a new election and a third extended postponement put pressure on the British pound and provoked a decline in the stock markets, including in the US Indices. GBPUSD declined to 1.2850 in the morning after touching 1.3000 overnight. S&P500 finished the Tuesday session with a 0.4% decline.

However, the stocks are also under pressure because of several weak reports among the largest companies, traditionally considered as health indicators. The shares of McDonald’s, UPS, Texas Instruments declined lost from 3% to 10% overnight on the background of weak earnings reports, which strengthened concerns about the health of the US economy. 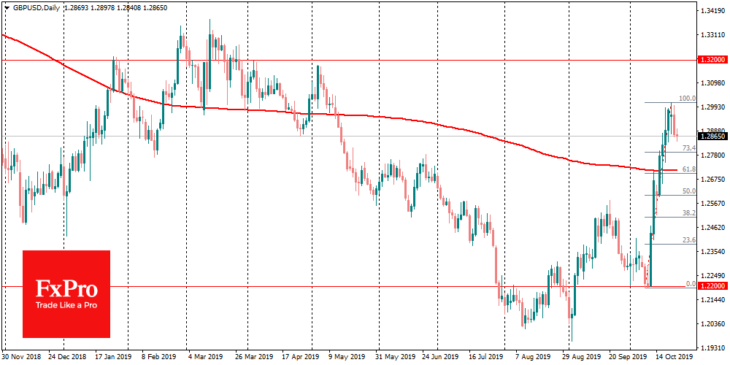 McDonald’s is considered by investors as an indicator of consumer sentiments, while UPS and Texas Instruments to a greater extent reflect the business activity. Under these conditions, macroeconomics, and expectations of central bank actions come to the fore.

Against this background, the dollar once again strengthens its position. The dollar index against a basket of 6 major currencies turned up this week after touching the 200-day average. EURUSD has been declining for the third day in a row, stumbling upon resistance around 1.1170 and never reaching its 200-day average. 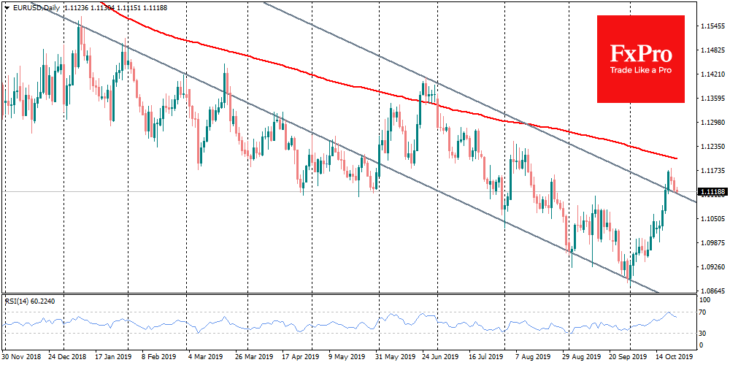 As the FxPro Analyst Team said, the caution of traders before the ECB meeting and business activity data in the Euro-region may well put pressure on the single currency, causing a further correction of the euro against the dollar.

The British pound, as well as the euro, also looks vulnerable in the short term, correcting its previous rally. Corrective rollback to 73.4% of the initial GBPUSD rally suggests the possibility of declining the pair to 1.28. In the case of a deeper correction, the targets of the bears may be levels around 1.27, where the 200-day average is situated, which in recent days has turned from a resistance line to support.

Oil Under the Gun Again. On Monday morning, a barrel of Brent is
Euro Completely Recovered Its February Losses. On Monday, March 2nd, the major currency pair
How long to the parity for EURUSD?. EURUSD price is continuing to decrease. The last
Correctional Rebound in Oil Died DownGPBUSD: chance of a drop is still thereGold Stopped GrowingBrent oil price to drop down to $50Pound Handled the Brexit with DignityUSDCAD rises to 7-week high above 1.3200
Quotes / Sat 17 / April / 05:58am

Bitcoin and Gold Prices Diverge Again, Extending 5-Month Correlation. Bitcoin is again feeling the pull of gravity
Markets roll back after last week decline, EURUSD tests the important resistance. Market focus Holidays in the U. S. and
What is crypto-currency in simple words?.   Crypto-currency is electronic virtual or digital money.
How to make money OUT of crypto-currency?How to earn bitcoin?What is bitcoin in simple words?How to buy a bitcoin?
Economic calendar / Saturday 17 / April / 08:58am