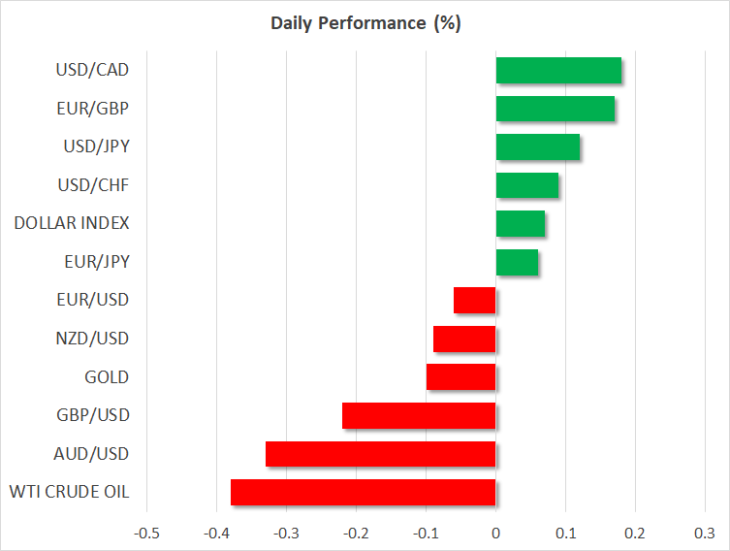 Dollar edges higher on fading expectations of an aggressive Fed

The US dollar was heading towards three-week highs against a basket of currencies on Tuesday as investors pared back their expectations that the Federal Reserve would soon embark on an aggressive easing cycle. Following the upbeat US jobs report on Friday, the odds of a 50-basis points rate cut have tumbled from around 20% to just 2.5%. And while some analysts are doubtful whether the Fed will act at all at the July meeting, most traders think a rate cut later this month is a done deal.

But with risk assets having rallied since June on the back of rising expectations of sharp rate cuts, global equities continued to be weighed by the prospect of a more modest policy easing by the Fed. US stocks ended the day in the red on Monday, with the Nasdaq Composite suffering the most (-0.8%). The tech-heavy index was pulled lower by a 2% slump in Apple shares, which came under pressure after the broker Rosenblatt Securities downgraded the company to “sell” on forecasts of lower iphone and ipad sales.

In the currency markets, the risk-sensitive Australian and New Zealand dollars extended their losses, falling to two-week lows. The safe-haven yen didn’t fare any better as it was under pressure from another deterioration in Japanese wages in May, which increased the chances of the Bank of Japan expanding its massive stimulus programme in the coming months. The dollar advanced to fresh one-month highs of 108.89 yen at the start of European trading.

Markets braced for an overdose of Fed speakers

Fed Chairman Jerome Powell will kick off a busy week for Fed speakers. He will deliver opening remarks at an event organized by the Boston Federal Reserve at 12:45 GMT. It’s unclear whether he will comment on monetary policy today but he will certainly be talking about the economy and the rate path when he testifies before Congress on Wednesday and Thursday.

Another chance to gauge the probability of a July rate cut could come from Wednesday’s FOMC minutes of the June meeting when the Fed made a dramatic shift to a more dovish stance. With the Fed seeming unlikely to signal big rate cuts at this point, the dollar looks set to maintain its bullish bias, especially if other central banks such as the ECB announce looser policy at their upcoming meetings.

That’s one factor weighing on the euro currently, as the single currency struggles to hold onto the $1.12 handle. The ECB next meets on July 25 and many traders are expecting that the central bank will set the stage for more stimulus for the Eurozone’s flagging economy.

The pound also remains on the backfoot, slipping to a fresh six-month low of $1.2469 today. UK data on monthly GDP growth and industrial output will be watched tomorrow for signs whether the British economy contracted in the second quarter. The Bank of England could be forced to follow its counterparts in moving towards more accommodative policy if the data disappoints.

Oil Under the Gun Again. On Monday morning, a barrel of Brent is
Euro Completely Recovered Its February Losses. On Monday, March 2nd, the major currency pair
How long to the parity for EURUSD?. EURUSD price is continuing to decrease. The last
Correctional Rebound in Oil Died DownGPBUSD: chance of a drop is still thereGold Stopped GrowingBrent oil price to drop down to $50Pound Handled the Brexit with DignityUSDCAD rises to 7-week high above 1.3200
Quotes / Sat 17 / April / 05:24am

Bitcoin and Gold Prices Diverge Again, Extending 5-Month Correlation. Bitcoin is again feeling the pull of gravity
Markets roll back after last week decline, EURUSD tests the important resistance. Market focus Holidays in the U. S. and
What is crypto-currency in simple words?.   Crypto-currency is electronic virtual or digital money.
How to make money OUT of crypto-currency?How to earn bitcoin?What is bitcoin in simple words?How to buy a bitcoin?
Economic calendar / Saturday 17 / April / 08:24am