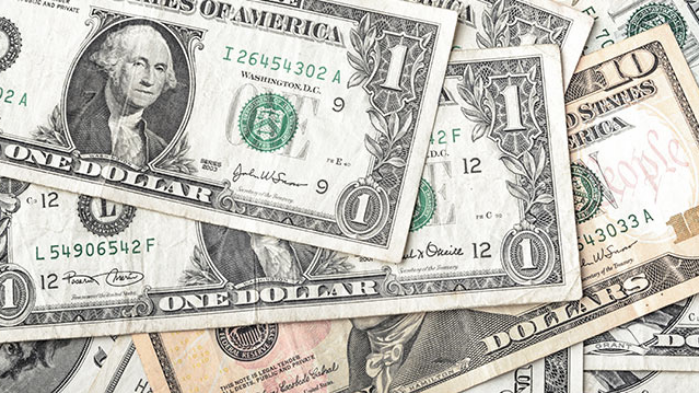 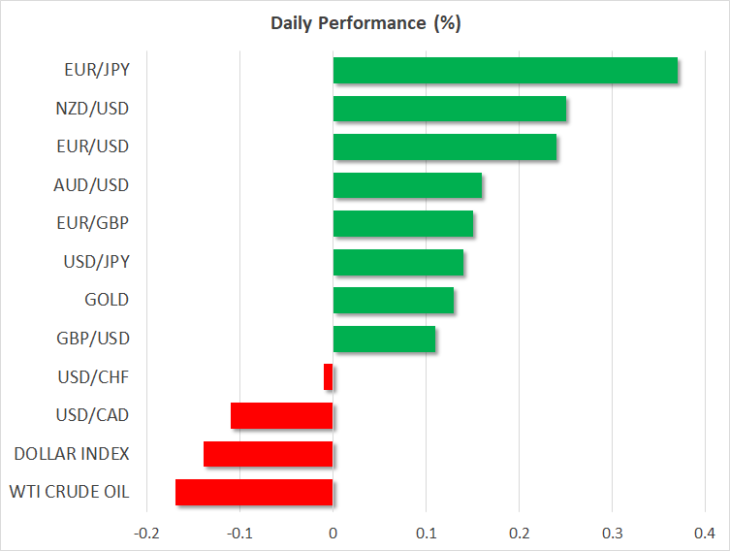 The dollar index – a measure of the US currency against a basket of six rivals – edged up towards last week’s 2½-year peak of 99.67 as dimming hopes of a breakthrough in this week’s Sino-US trade talks as well as a host of other global uncertainties boosted demand for safe haven assets.

The greenback’s strength comes despite Treasury yields coming under pressure yesterday following Fed Chairman Jerome Powell’s speech where he signalled more policy easing. Speaking in Denver, Powell said the Fed will resume the expansion of its balance sheet, though he made it clear this did not amount to quantitative easing. The decision to allow the balance sheet to grow is in response to the recent funding squeeze in money markets that led to a spike in short-term interest rates.

Powell also reiterated that the Fed “will act as appropriate” to sustain economic expansion. Although this was a repeat of recent language and Powell maintained that the outlook remains “favourable”, investors interpreted his comments on the labour market as bit more telling about the likelihood of additional rate cuts. Powell downgraded his view of the jobs market, saying “we now see more-moderate growth”.

Expectations of a rate cut in October shot up in futures markets, with traders now pricing an 83% probability of a 25-basis point reduction. The dollar eased slightly against the yen after Powell’s remarks but remained broadly supported by weakness in other majors, which have been pummelled by weakening economic prospects.

Gold also advanced higher, reaching $1511 an ounce, but the yen gave back some of yesterday’s gains.

Powell will come under the spotlight again when he delivers another speech at 15:00 GMT, and the minutes of the September FOMC meeting are also due at 18:00 GMT, though following yesterday’s remarks from Powell and other Fed speakers, the minutes are likely to be viewed as somewhat out-of-date.

The Trump administration continued to pile pressure on China, imposing visa restrictions on Chinese government officials just a day after it added 20 Chinese government agencies and tech companies to the US Entity List, in effect blacklisting them from doing business with American firms. Although the US has cited China’s treatment of Muslim minorities in the country as the reason for the restrictions, it has created a negative backdrop for the trade talks, with negotiations set to move to top-level discussions on Thursday.

The question now is how China will respond to these latest actions by the US and whether there’s still a chance for the two sides to achieve some sort of a breakthrough in their long-running trade dispute. Markets don’t appear to have completely given up on some kind of progress being made as traders were encouraged by reports that China is sending one of its largest delegations to Washington.

Stocks in Asia pared earlier sharp losses, while US equity futures turned positive. The risk sensitive Australian dollar also headed higher in a sign of some optimism in the markets.

The pound slumped to one-month lows against the US dollar, briefly slipping below $1.22, as talks between the United Kingdom and the European Union came close to collapse following a tense phone conversation between the UK and German leaders on Tuesday. German Chancellor Angela Merkel reportedly said a deal was “overwhelmingly unlikely”, while sources at Downing Street were quoted as saying that a deal is “essentially impossible not just now but ever”.

However, tempers cooled slightly later in the day after the Irish and British prime ministers agreed to meet later this week in a last-ditch attempt to break the deadlock. Irish PM Leo Varadkar was comparatively less pessimistic, saying a deal will be “very difficult”.

However, with the EU summit only a week away and Britain and Ireland being so far apart on the Northern Irish backstop issue, it’s highly unlikely a deal can be reached even if some progress is made in the coming days, meaning it’s almost inevitable there will be another extension to the Brexit deadline.

Oil Under the Gun Again. On Monday morning, a barrel of Brent is
Euro Completely Recovered Its February Losses. On Monday, March 2nd, the major currency pair
How long to the parity for EURUSD?. EURUSD price is continuing to decrease. The last
Correctional Rebound in Oil Died DownGPBUSD: chance of a drop is still thereGold Stopped GrowingBrent oil price to drop down to $50Pound Handled the Brexit with DignityUSDCAD rises to 7-week high above 1.3200
Quotes / Sun 18 / April / 05:17pm

Bitcoin and Gold Prices Diverge Again, Extending 5-Month Correlation. Bitcoin is again feeling the pull of gravity
Markets roll back after last week decline, EURUSD tests the important resistance. Market focus Holidays in the U. S. and
What is crypto-currency in simple words?.   Crypto-currency is electronic virtual or digital money.
How to make money OUT of crypto-currency?How to earn bitcoin?What is bitcoin in simple words?How to buy a bitcoin?
Economic calendar / Sunday 18 / April / 08:17pm