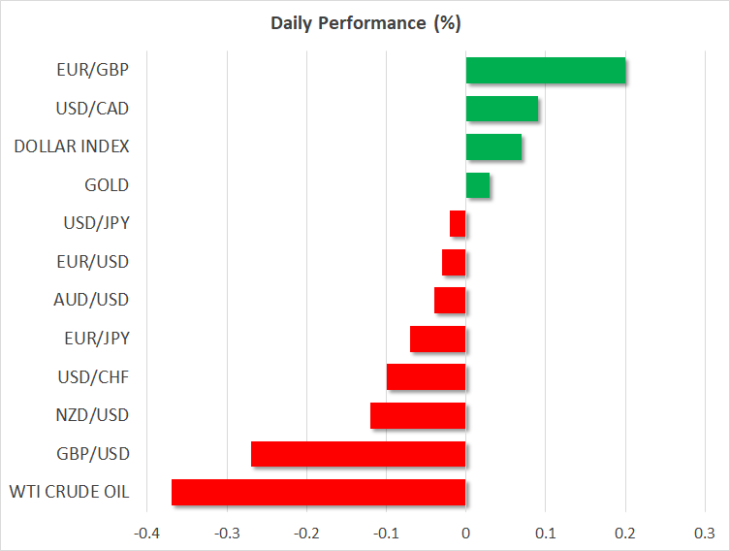 Dollar holds firm ahead of Fed

The US dollar held onto Friday’s gains at the start of the trading week following the boost from better-than-expected US growth figures for the second quarter. The American economy grew by an annualized 2.1% in Q1, above forecasts of 1.8% and casting doubt about the prospect of significant easing by the Federal Reserve, which is due to meet this week for a rate setting decision.

Further lifting the greenback on Friday were remarks by the White House’s chief economic advisor, Larry Kudlow, who told reporters that President Trump had ruled out intervening in the currency markets to weaken the dollar.

The dollar index was trading close to Friday’s two-month top of 98.09, while against the yen, the greenback hovered around 108.60. Whether the US currency will be able to stay on the front foot will very much depend on what the Fed signals on Wednesday when it is expected to cut interest rates for the first time since the financial crisis.

Prior to the GDP data, investors had fully priced in rate cuts of up to 100 basis points over the next 12 months. But those odds have fallen slightly as the Q2 growth numbers were the latest in a series of solid economic indicators to come out of the United States.  While the consensus among market participants remains that the Fed will embark on a full-on easing cycle, any hints by Fed Chairman Jerome Powell on Wednesday that the expected cut is merely an ‘insurance’ move, could lead to a much more significant unwinding of the aggressive rate cut bets.

Busy week as BoJ and BoE meet too, new round of US-China trade talks

Ahead of the Fed, the Bank of Japan will announce its latest decision on Tuesday and could flag additional stimulus if conditions deteriorate further. However, the BoJ is unlikely to make any changes to its policy this week and so the yen stands to gain versus its US counterpart as long as the BoJ does not surprise and the Fed does not disappoint.

Also crucial for both the yen and the dollar, as well as for broader risk sentiment will be tomorrow’s planned talks between US and Chinese trade negotiators. The meeting in Shanghai will be the first face-to-face one between the two sides and investors will be looking for signs that the US and China are able to bridge their differences following the sharp escalation in May that led to the breakdown of negotiations.

However, comments from President Trump have so far not been very encouraging. Trump suggested on Friday that China could delay signing a trade agreement until after the 2020 presidential election in the hope that they might be able to get a better deal if a Democrat was to get elected as president.

New British prime minister, Boris Johnson, appeared to be preparing the country for a disorderly exit from the European Union after he told EU leaders that there will be no negotiations unless the Irish border backstop is abolished. This sets Johnson on a possible collision course with the EU, who branded his demands as “unacceptable”. Some think the PM could also be laying the groundwork for a snap general election as polls suggest the Conservatives’ popularity has surged following Johnson’s win in the party leadership contest.

The pound hit a fresh 28-month low of 1.2333 as traders priced in an increased probability that the UK would leave the EU without a deal on October 31. The British currency is at risk of coming under additional downside pressure if the Bank of England drops its tightening bias as expected and adopts a more dovish tone at its policy meeting on Thursday.

Other majors didn’t fare much better on Monday as the euro was stuck near two-year lows on expectations that the European Central Bank will ease policy in September, while the Australian dollar struggled at two-month lows in anticipation of further rate cuts by the RBA in the coming months.

Oil Under the Gun Again. On Monday morning, a barrel of Brent is
Euro Completely Recovered Its February Losses. On Monday, March 2nd, the major currency pair
How long to the parity for EURUSD?. EURUSD price is continuing to decrease. The last
Correctional Rebound in Oil Died DownGPBUSD: chance of a drop is still thereGold Stopped GrowingBrent oil price to drop down to $50Pound Handled the Brexit with DignityUSDCAD rises to 7-week high above 1.3200
Quotes / Mon 19 / April / 03:51am

Bitcoin and Gold Prices Diverge Again, Extending 5-Month Correlation. Bitcoin is again feeling the pull of gravity
Markets roll back after last week decline, EURUSD tests the important resistance. Market focus Holidays in the U. S. and
What is crypto-currency in simple words?.   Crypto-currency is electronic virtual or digital money.
How to make money OUT of crypto-currency?How to earn bitcoin?What is bitcoin in simple words?How to buy a bitcoin?
Economic calendar / Monday 19 / April / 06:51am