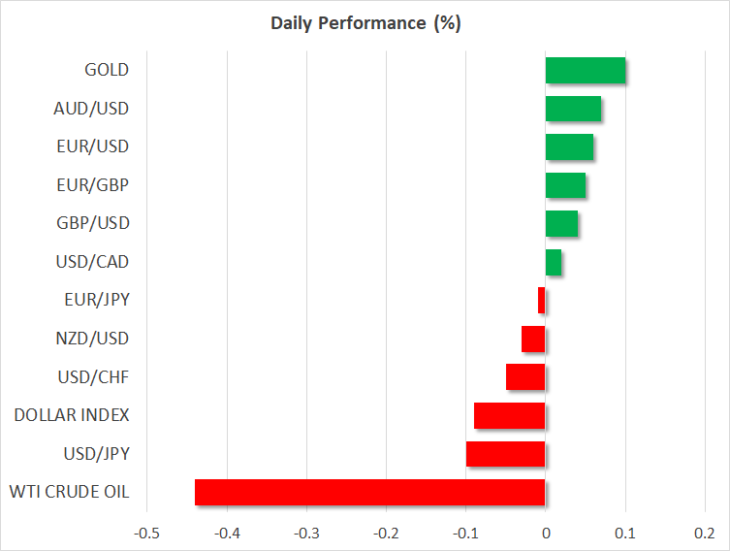 Better-than-expected economic data and optimism that the US and China are nearing a ‘phase one’ trade deal lifted the US dollar to the highest in three weeks against a basket of currencies on Tuesday. The dollar index reached a peak of 98.01 yesterday before easing to around 97.90 today.

The greenback was boosted by the ISM non-manufacturing PMI, which rose to 54.7 in October from 52.6, beating expectations of 53.5. The solid rebound in the closely watched gauge of services activity in the United States comes hot on the heels of Friday’s much stronger-than-anticipated jobs report, which together, have substantially reduced concerns of a recession and underscored the Fed’s policy to pause its rate cutting plan.

Rising hopes that US and Chinese negotiators are closing in on an interim trade agreement have also been driving the dollar higher in recent weeks, particularly against safe-haven currencies. The dollar climbed back above the key 109-yen level, while versus the Swiss franc, it firmed to around 0.9930.

Gold also took a big knock on Tuesday, slumping by 1.7%, as the strong bounce in risk appetite pushed up the yield on US Treasury notes, decreasing the appeal of the precious metal. It was last trading flat at $1484.47 an ounce.

Although the trade deal optimism kept markets buoyant on Wednesday, there was some caution among investors as they waited for further developments in the ongoing trade talks. Reports suggest China is seeking to secure not only a suspension of the planned tariffs due to come into effect on December 15 but also a rolling back of some of the existing duties on Chinese imports into the US before signing a deal. While the US has signalled it is considering cancelling some tariffs, it is unclear how far it’s willing to compromise.

What is clear, however, is that President Trump is keen to see a resumption of agricultural exports to China before he hits the campaign trail for the 2020 presidential race and markets are hoping this will be enough to get the ‘phase one’ deal over the finish line.

But until there’s further developments, stocks took a breather from their recent impressive gains with the S&P 500 failing to match the Dow Jones and the Nasdaq Composite in closing at another record high. Asian shares were mixed today, and stock futures pointed to modest gains in Europe and the US.

The euro was struggling to regain its positive footing after tumbling over the past two days on the back of the dollar’s rebound. But the single currency found some support from better-than-expected industrial orders out of Germany today, helping it inch up to $1.1087.

The pound, meanwhile, traded sideways, hovering around $1.29 amid some concern that the upcoming snap general election in the UK will produce another hung parliament. But in the more near-term, the Bank of England’s policy meeting on Thursday will be the focus for traders as policymakers may finally drop their tightening bias given the sharp slowdown in the British economy over the past two quarters.

In other currencies, the Australian dollar extended its gains today, rising above the $0.69 level and the New Zealand dollar reversed earlier losses from disappointing employment numbers to turn positive. New Zealand’s unemployment rate jumped from 3.9% to 4.2% in the third quarter, missing forecasts of 4.1%. The kiwi initially fell on the data as it fuelled expectations the Reserve Bank of New Zealand will cut interest rates next week, but the sell-off quickly ran out of steam, having already fallen sharply this week.

Oil Under the Gun Again. On Monday morning, a barrel of Brent is
Euro Completely Recovered Its February Losses. On Monday, March 2nd, the major currency pair
How long to the parity for EURUSD?. EURUSD price is continuing to decrease. The last
Correctional Rebound in Oil Died DownGPBUSD: chance of a drop is still thereGold Stopped GrowingBrent oil price to drop down to $50Pound Handled the Brexit with DignityUSDCAD rises to 7-week high above 1.3200
Quotes / Sun 18 / April / 06:21pm

Bitcoin and Gold Prices Diverge Again, Extending 5-Month Correlation. Bitcoin is again feeling the pull of gravity
Markets roll back after last week decline, EURUSD tests the important resistance. Market focus Holidays in the U. S. and
What is crypto-currency in simple words?.   Crypto-currency is electronic virtual or digital money.
How to make money OUT of crypto-currency?How to earn bitcoin?What is bitcoin in simple words?How to buy a bitcoin?
Economic calendar / Sunday 18 / April / 09:21pm