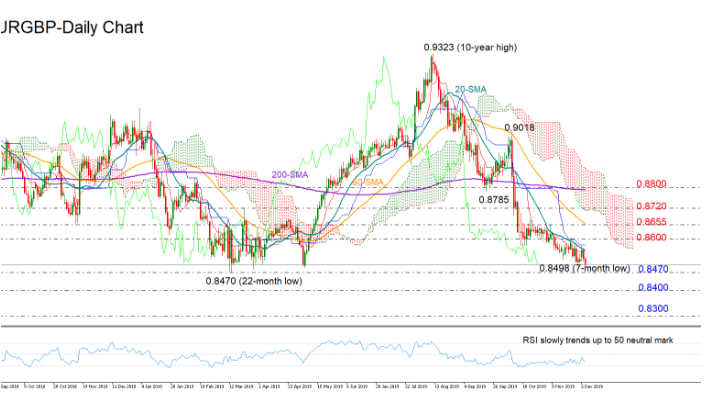 EURGBP started the month on the downside as buyers could not close above the 20-day simple moving average (SMA) that has been restricting upside corrections over the past four weeks.

The short-term bias is currently viewed as bearish-to-neutral as the RSI looks to be distancing itself from its 30 oversold mark to reach its 50 neutral mark, while in Ichimoku indicators, the red Tenkan-sen line is stabilizing slightly below the blue Kijun-sen.

On the downside there is a strong support between 0.8498 and 0.8470. Should the price fail to rebound within this area, the door would open for the 0.8400 round level, a break of which could then shift attention towards the 0.8300 mark.

In the positive scenario, a decisive close above the 20-day SMA and preferably above the 0.8600 barrier could bring a stronger obstacle near 0.8655 back into view. Moving higher and above the 50-day SMA, the bullish action could pick up steam towards 0.8720, where any violation would push resistance up to 0.8800.

Turning to the medium-term picture, the fourth-month old downtrend off the 10-year high of 0.9323 continues to keep the outlook negative, with the latest bearish cross between the 50- and the 200-day SMAs reducing the odds for an outlook reversal.

In brief, EURGBP is expected to trade bearish-to-neutral in the short-term, with traders likely waiting for a clear close above the 20-day SMA in order to place buying orders.

Oil Under the Gun Again. On Monday morning, a barrel of Brent is
Euro Completely Recovered Its February Losses. On Monday, March 2nd, the major currency pair
How long to the parity for EURUSD?. EURUSD price is continuing to decrease. The last
Correctional Rebound in Oil Died DownGPBUSD: chance of a drop is still thereGold Stopped GrowingBrent oil price to drop down to $50Pound Handled the Brexit with DignityUSDCAD rises to 7-week high above 1.3200
Quotes / Sun 18 / April / 06:53pm

Bitcoin and Gold Prices Diverge Again, Extending 5-Month Correlation. Bitcoin is again feeling the pull of gravity
Markets roll back after last week decline, EURUSD tests the important resistance. Market focus Holidays in the U. S. and
What is crypto-currency in simple words?.   Crypto-currency is electronic virtual or digital money.
How to make money OUT of crypto-currency?How to earn bitcoin?What is bitcoin in simple words?How to buy a bitcoin?
Economic calendar / Sunday 18 / April / 09:54pm