EURGBP consolidates in tight range in near term

EURGBP is consolidating within a tight trading range over the last month with an upper boundary at the 0.8590 resistance and the lower boundary at the 0.8450 support level. Currently, the pair is capped by the short-term moving averages and the 23.6% Fibonacci retracement level of the downward wave from 0.9324 to 0.8275 near 0.8520, suggesting a potential breakdown of the channel. 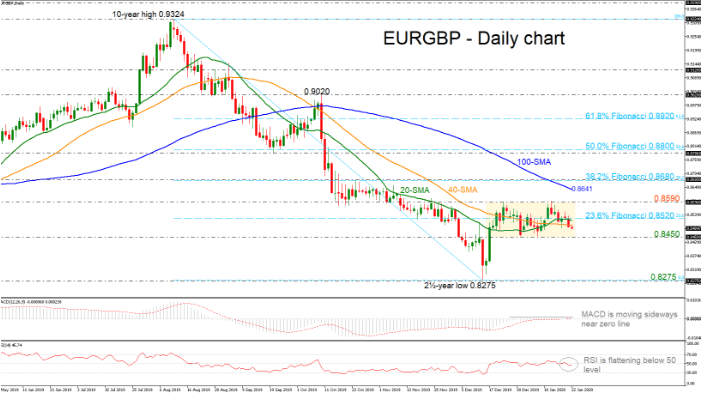 The technical indicators are flattening, confirming the recent view in the daily timeframe. The MACD is moving with very weak momentum slightly above the zero level, while the RSI is lacking direction below the 50 level.

The immediate support level is coming from the 0.8450 barrier and any violation of this barrier could open the way for the two-and-a-half-year low of the 0.8275 crucial support, registered on December 13.

In brief, although, the pair has been in a bearish mode over the past six months, it is heading sideways in the short-term.

Oil Under the Gun Again. On Monday morning, a barrel of Brent is
Euro Completely Recovered Its February Losses. On Monday, March 2nd, the major currency pair
How long to the parity for EURUSD?. EURUSD price is continuing to decrease. The last
Correctional Rebound in Oil Died DownGPBUSD: chance of a drop is still thereGold Stopped GrowingBrent oil price to drop down to $50Pound Handled the Brexit with DignityUSDCAD rises to 7-week high above 1.3200
Quotes / Mon 19 / April / 03:24am

Bitcoin and Gold Prices Diverge Again, Extending 5-Month Correlation. Bitcoin is again feeling the pull of gravity
Markets roll back after last week decline, EURUSD tests the important resistance. Market focus Holidays in the U. S. and
What is crypto-currency in simple words?.   Crypto-currency is electronic virtual or digital money.
How to make money OUT of crypto-currency?How to earn bitcoin?What is bitcoin in simple words?How to buy a bitcoin?
Economic calendar / Monday 19 / April / 06:24am