EURGBP is entering bullish territory as the price is deviating above its shorter-term moving averages (SMAs) at the same time the MACD is turning positive after 5 months. The RSI and the red Tenkan-sen line are resuming their positive momentum, backing this view as well. 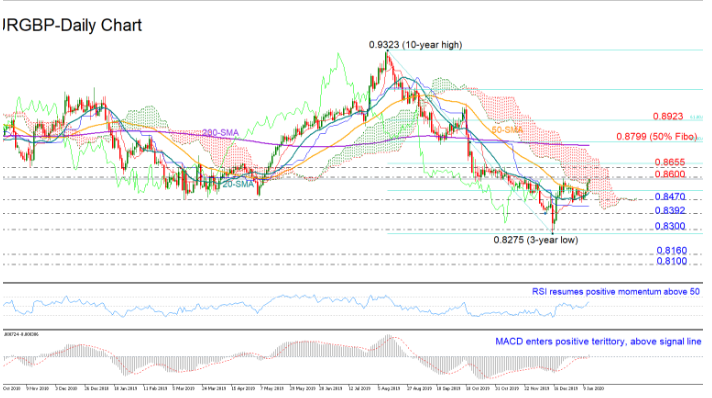 Before turning optimistic however,  the price should first clear the key 0.8600-0.8655 resistance area as any failure to surpass that region could shift the spotlight back to the 0.8470 support level. Lower, the December 9 trough of 0.8392 may also intervene before a stronger barrier around 0.8300 takes over. If the latter fails to hold, the way could open towards the 0.8160-0.8100 former restrictive zone, strengthening the negative outlook in the medium-term picture too.

Summarizing, buying pressure seems to be increasing in the EURGBP market, though traders could wait for a decisive close above 0.8655 to confirm the sustainability of the current upside move.

Oil Under the Gun Again. On Monday morning, a barrel of Brent is
Euro Completely Recovered Its February Losses. On Monday, March 2nd, the major currency pair
How long to the parity for EURUSD?. EURUSD price is continuing to decrease. The last
Correctional Rebound in Oil Died DownGPBUSD: chance of a drop is still thereGold Stopped GrowingBrent oil price to drop down to $50Pound Handled the Brexit with DignityUSDCAD rises to 7-week high above 1.3200
Quotes / Sun 18 / April / 05:27pm

Bitcoin and Gold Prices Diverge Again, Extending 5-Month Correlation. Bitcoin is again feeling the pull of gravity
Markets roll back after last week decline, EURUSD tests the important resistance. Market focus Holidays in the U. S. and
What is crypto-currency in simple words?.   Crypto-currency is electronic virtual or digital money.
How to make money OUT of crypto-currency?How to earn bitcoin?What is bitcoin in simple words?How to buy a bitcoin?
Economic calendar / Sunday 18 / April / 08:27pm