EURGBP looks for a rebound but nearby resistance seems strong

EURGBP is searching for a new lower trough around the 0.8600 support area to add more credibility to the downward pattern started from the 10-year high of 0.9323. 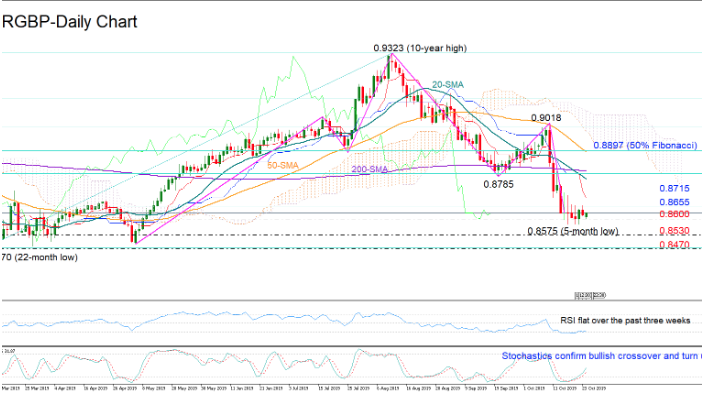 The fast-Stochastics and the RSI hint that the odds for an upside correction are rising as the former has already rounded up in the oversold area and the latter has been flattening for a while around its 30 oversold mark.

Resistance around 0.8655, where the 78.6% Fibonacci of the upleg from 0.8470 to 0.9323 is placed, could determine whether a potential upside move could become stronger or softer in the short-term. If it proves a weak obstacle, with the price jumping decisively above it, the rally may stretch towards the previous low of 0.8785 in case the 0.8715 barrier fails to hold as well. Moving higher, the gate will open for the 50% Fibonacci of 0.8897.

Alternatively, if 0.8655 keeps control of the bulls, the focus will shift back to 0.8575, where the bearish action bottomed recently, while slightly lower the bears may find a tougher wall between 0.8530 and 0.8470.

Looking at the three-month window, the bearish outlook remains intact as the pair has yet to climb above 0.8775, in which case the market would resume its longer-term neutral direction.

Summarizing, technical signals suggest that EURGBP could attempt to reverse higher in the short-term, though for a more meaningful rebound, the bulls may need to overcome the restrictive area around 0.8655. In the medium-term picture, only an upturn above 0.8785 could eliminate the negative outlook.

Oil Under the Gun Again. On Monday morning, a barrel of Brent is
Euro Completely Recovered Its February Losses. On Monday, March 2nd, the major currency pair
How long to the parity for EURUSD?. EURUSD price is continuing to decrease. The last
Correctional Rebound in Oil Died DownGPBUSD: chance of a drop is still thereGold Stopped GrowingBrent oil price to drop down to $50Pound Handled the Brexit with DignityUSDCAD rises to 7-week high above 1.3200
Quotes / Fri 07 / May / 09:47am

Bitcoin and Gold Prices Diverge Again, Extending 5-Month Correlation. Bitcoin is again feeling the pull of gravity
Markets roll back after last week decline, EURUSD tests the important resistance. Market focus Holidays in the U. S. and
What is crypto-currency in simple words?.   Crypto-currency is electronic virtual or digital money.
How to make money OUT of crypto-currency?How to earn bitcoin?What is bitcoin in simple words?How to buy a bitcoin?
Economic calendar / Friday 07 / May / 12:47pm