EURGBP registered losses for the fourth consecutive week and bearish signals became stronger as the price failed to return above the upward support line, crossing instead under its shorter-term simple moving averages (SMA) and the Ichimoku cloud. 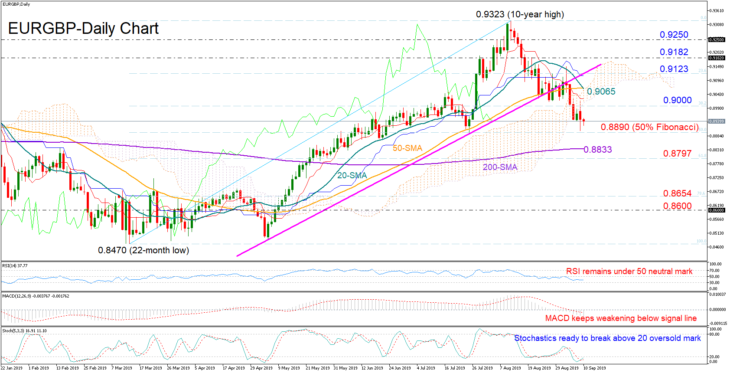 The 50% Fibonacci of the upleg from 0.8470 to 0.9323 managed to confidently curb downside movements on Monday and although the Stochastics are currently preparing to exit the oversold territory, the short-term bias remains skewed to the downside as the MACD maintains negative momentum under its red signal line and the RSI shows no clear direction in the bearish area.

Meanwhile in the medium-term picture, the positive sentiment has weakened but not faded yet as the pair continues to trade above the 61.8% Fibonacci of 0.8796.

Summarizing, EURGBP is likely to remain under pressure in the short-term, though losses could be limited as the market looks to be trading near oversold levels. In the medium-term picture, a drop under 0.8796 would shift the outlook from bullish to neutral.

Oil Under the Gun Again. On Monday morning, a barrel of Brent is
Euro Completely Recovered Its February Losses. On Monday, March 2nd, the major currency pair
How long to the parity for EURUSD?. EURUSD price is continuing to decrease. The last
Correctional Rebound in Oil Died DownGPBUSD: chance of a drop is still thereGold Stopped GrowingBrent oil price to drop down to $50Pound Handled the Brexit with DignityUSDCAD rises to 7-week high above 1.3200
Quotes / Mon 14 / June / 05:58am

Bitcoin and Gold Prices Diverge Again, Extending 5-Month Correlation. Bitcoin is again feeling the pull of gravity
Markets roll back after last week decline, EURUSD tests the important resistance. Market focus Holidays in the U. S. and
What is crypto-currency in simple words?.   Crypto-currency is electronic virtual or digital money.
How to make money OUT of crypto-currency?How to earn bitcoin?What is bitcoin in simple words?How to buy a bitcoin?
Economic calendar / Monday 14 / June / 08:58am