EURJPY is prolonging the rebound off the 2 ½-year low of 115.85 as the RSI and the MACD are signaling mounting buying interest, with the former surpassing its 50 neutral mark and the latter improving above its signal line. 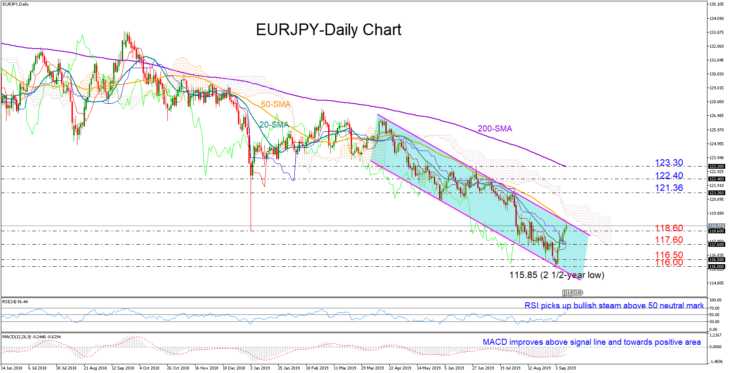 Questions however remain about whether the bullish forces are strong enough to violate the descending channel to the upside.

Should the price close comfortably above the channel, piercing the lower surface of the Ichimoku cloud and resistance around 119.86 as well, the rally could extend towards the 121.36 barrier. Further up, the area between 122.40-123.30, where the 200-day simple moving average (SMA) is heading, could allow for more gains if it gets breached. The latter could also change the structure of the medium-term picture from bearish to neutral, though with the 50-day SMA slipping below the 200-day SMA, an outlook reversal may come later rather than sooner.

Alternatively, if the bulls bounce off the channel bar currently seen around 119.35, the market could immediately retest the 118.60 support-turned-resistance level. Correcting lower, sellers would shift attention towards the 20-day SMA currently around the 117.60 obstacle, a break of which could bring the 116.50-116.00 zone back in the spotlight.

In brief, EURJPY is facing improvement in buying appetite in the short-term, though only a closing price above the channel would confirm the positive sentiment. In the medium-term picture, a stronger upturn above 123.30 is needed to eliminate the bearish risk.

Oil Under the Gun Again. On Monday morning, a barrel of Brent is
Euro Completely Recovered Its February Losses. On Monday, March 2nd, the major currency pair
How long to the parity for EURUSD?. EURUSD price is continuing to decrease. The last
Correctional Rebound in Oil Died DownGPBUSD: chance of a drop is still thereGold Stopped GrowingBrent oil price to drop down to $50Pound Handled the Brexit with DignityUSDCAD rises to 7-week high above 1.3200
Quotes / Mon 14 / June / 05:50am

Bitcoin and Gold Prices Diverge Again, Extending 5-Month Correlation. Bitcoin is again feeling the pull of gravity
Markets roll back after last week decline, EURUSD tests the important resistance. Market focus Holidays in the U. S. and
What is crypto-currency in simple words?.   Crypto-currency is electronic virtual or digital money.
How to make money OUT of crypto-currency?How to earn bitcoin?What is bitcoin in simple words?How to buy a bitcoin?
Economic calendar / Monday 14 / June / 08:50am