EURJPY could not lift the 122.63 bar last week and reversed south to test the ascending trendline drawn from the 2 ½-year low of 115.85. 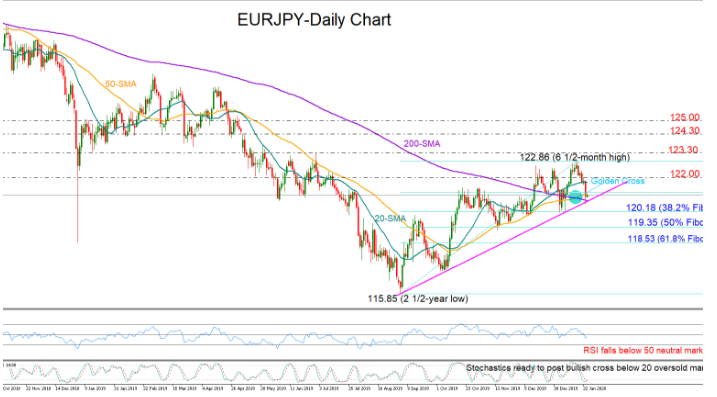 The falling RSI which has crossed under its 50 neutral mark suggests that the bearish bias has not faded yet. However, with the Stochastics already located within the oversold area and the price trading near the supportive trendline, an upside correction would not be a surprise.

It is also important noting that the 50-day simple moving average (SMA) has climbed above the 200-day SMA, after more than a year, encouraging over a trend improvement in the medium-term picture.

In brief, the short-term bias remains bearish in the EURJPY market and it would be interesting to see whether the ascending trendline could save the pair from additional downfalls. Meanwhile in the medium-term picture positive trend signals seem to be strengthening following the creation of a golden cross.

Oil Under the Gun Again. On Monday morning, a barrel of Brent is
Euro Completely Recovered Its February Losses. On Monday, March 2nd, the major currency pair
How long to the parity for EURUSD?. EURUSD price is continuing to decrease. The last
Correctional Rebound in Oil Died DownGPBUSD: chance of a drop is still thereGold Stopped GrowingBrent oil price to drop down to $50Pound Handled the Brexit with DignityUSDCAD rises to 7-week high above 1.3200
Quotes / Fri 26 / February / 09:30pm

Bitcoin and Gold Prices Diverge Again, Extending 5-Month Correlation. Bitcoin is again feeling the pull of gravity
Markets roll back after last week decline, EURUSD tests the important resistance. Market focus Holidays in the U. S. and
What is crypto-currency in simple words?.   Crypto-currency is electronic virtual or digital money.
How to make money OUT of crypto-currency?How to earn bitcoin?What is bitcoin in simple words?How to buy a bitcoin?
Economic calendar / Saturday 27 / February / 12:30am