EURUSD has turned neutral in the short term after falling into to the Ichimoku cloud. But despite being restricted by the cloud top, the risks for the pair are to the upside as the RSI is still in positive territory, though it has flatlined, while the MACD remains some distance above zero, having just slipped below its red signal line. 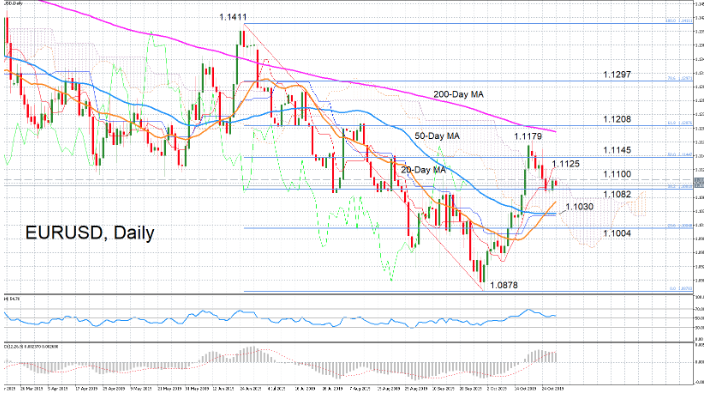 Another positive signal is from the Tenkan-sen line, which continues to rise and increase its distance from the Kijun-sen line. The Tenkan-sen line, currently at 1.1125, is likely to be the next hurdle for EURUSD should it manage to overcome immediate resistance at the top of the cloud at just above the 1.11 handle.

After that, the upward push could stall at the 50% Fibonacci retracement of the downleg from 1.1411 to 1.0878 before attempting to break above the October top of 1.1179, which was a more than 2-month high. Clearing this top would put the pair on a stronger footing to challenge the 61.8% Fibonacci at 1.1208, which it needs to beat if it is to return to a bullish outlook in the medium term.

However, should momentum weaken further, EURUSD is likely to drop below the 38.2% Fibonacci at 1.1082 and head towards key support in the 1.1030 region, which encompasses the 50-day moving average, the cloud bottom and the Kijun-sen line. Failure to hold above this support area would put the pair back in a bearish mode, opening the way for the 2½-year low of 1.0878 and also threatening the neutral picture in the medium term.

Oil Under the Gun Again. On Monday morning, a barrel of Brent is
Euro Completely Recovered Its February Losses. On Monday, March 2nd, the major currency pair
How long to the parity for EURUSD?. EURUSD price is continuing to decrease. The last
Correctional Rebound in Oil Died DownGPBUSD: chance of a drop is still thereGold Stopped GrowingBrent oil price to drop down to $50Pound Handled the Brexit with DignityUSDCAD rises to 7-week high above 1.3200
Quotes / Fri 07 / May / 05:08pm

Bitcoin and Gold Prices Diverge Again, Extending 5-Month Correlation. Bitcoin is again feeling the pull of gravity
Markets roll back after last week decline, EURUSD tests the important resistance. Market focus Holidays in the U. S. and
What is crypto-currency in simple words?.   Crypto-currency is electronic virtual or digital money.
How to make money OUT of crypto-currency?How to earn bitcoin?What is bitcoin in simple words?How to buy a bitcoin?
Economic calendar / Friday 07 / May / 08:08pm