On Tuesday, January 28, trading on the euro finished up by three points. Demand for risky assets rose in the US session, amid recovery in stock indices after the fall.

Global markets stabilized, while Chinese markets are closed until February 3. The focus of market playuers has shifted towards US coprporate reporting. The EURUSD pair recovered from 1.0998 to 1.1028, including the Asian session. 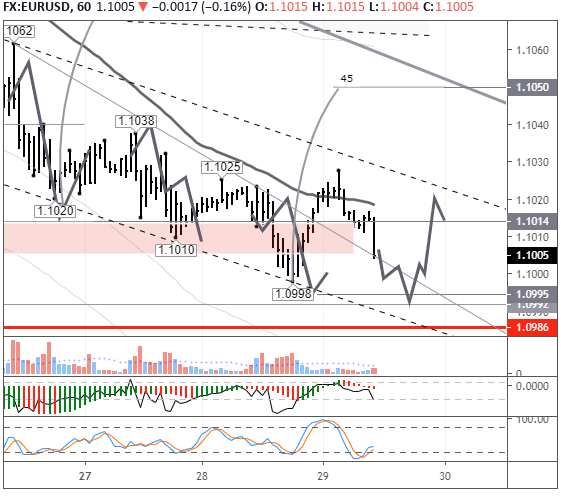 Expectations regarding a new low being set bore fruit. We have four lowering bottoms and a rebound to 1.1028. Technical conditions for an upwards correction to 1.1050 (at the 45th degree) have been created, but it is unlikely that bulls will be able to push the price to this level because of the ongoing events in China.

On Tuesday, Chinese President Xi Jinping said that China is confident of its capacity to bring the outbreak of coronavirus under control – the virus has claimed the lives of more than 132 people. Chinese experts say that the epidemic is very difficult to contain, since coronavirus has a long incubation period. Said period passes without symptoms, but the infection is capable of being transmitted.

There is not enough objective news to properly understand the depth of the situation. The Chinese authorities continue to boldly reassure everyone that everything is under control, but at the same time, there is a struggle with vloggers and bloggers. Several people are accused of spreading rumors of coronavirus on the Internet. One person was prosecuted for disseminating false information about pneumonia via social networks in Tianjin China, and six more were fined and warned about their future conduct. This was reported by Xinhua News Agency, citing information released by the City Department for Public Safety.

The governments of France, Japan, the United States and India have prepared planes to evacuate diplomats and their families. Why take them out if everything is under control? Why in a hurry to build a hospital with 1,000 beds by early February? Maybe the Chinese authorities are hiding a more harrowing version of the truth from us?

At the time of writing, the euro is worth 1.1006. The price underwent an adjustment – increasing by 76%. Major currencies are trading in the red, except for the yen. According to forecasts, the general view is that a decrease to 1.0992 could be on the cards. Then a rebound later, after the meeting of the US Federal Reserve and Chairman Jerome Powell’s subsequent news conference.

Oil Under the Gun Again. On Monday morning, a barrel of Brent is
Euro Completely Recovered Its February Losses. On Monday, March 2nd, the major currency pair
How long to the parity for EURUSD?. EURUSD price is continuing to decrease. The last
Correctional Rebound in Oil Died DownGPBUSD: chance of a drop is still thereGold Stopped GrowingBrent oil price to drop down to $50Pound Handled the Brexit with DignityUSDCAD rises to 7-week high above 1.3200
Quotes / Sat 27 / February / 04:27pm

Bitcoin and Gold Prices Diverge Again, Extending 5-Month Correlation. Bitcoin is again feeling the pull of gravity
Markets roll back after last week decline, EURUSD tests the important resistance. Market focus Holidays in the U. S. and
What is crypto-currency in simple words?.   Crypto-currency is electronic virtual or digital money.
How to make money OUT of crypto-currency?How to earn bitcoin?What is bitcoin in simple words?How to buy a bitcoin?
Economic calendar / Saturday 27 / February / 07:27pm