EURUSD’s attempts to climb above the downtrend line are finding significant downside pressure around that area of 1.1145, which is the 50.0% Fibonacci retracement of the down leg from 1.1411 to 1.0878 and where the upper-Bollinger band and 200-day simple moving average (SMA) also reside. The pair seems to be struggling with the 1.1145 to 1.1208 region of resistance, which may now have been reinforced by the shooting star. 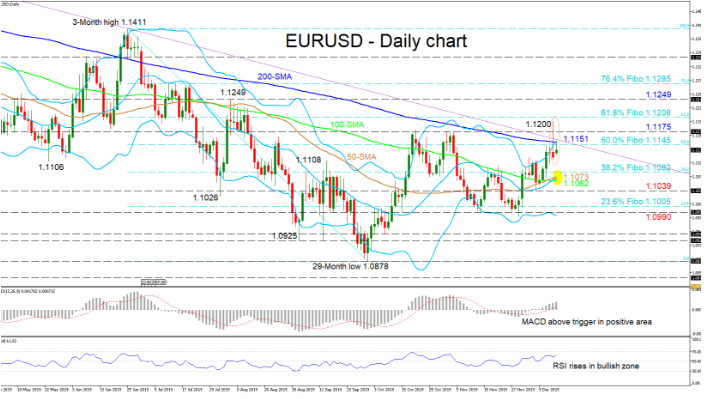 The short-term oscillators suggest that positive momentum is improving. The MACD has distanced itself above its red trigger line in the positive region, while the RSI is advancing in the bullish territory. The false break by the candle formation could suggest that the pair may consolidate or even readjust with the larger negative outlook, also reflected in the downward sloping 200- and 100-day SMAs.

Summarizing, the short-term bias is cautiously positive. Moreover, the current picture leans to the pair realigning with the bigger negative picture.

Oil Under the Gun Again. On Monday morning, a barrel of Brent is
Euro Completely Recovered Its February Losses. On Monday, March 2nd, the major currency pair
How long to the parity for EURUSD?. EURUSD price is continuing to decrease. The last
Correctional Rebound in Oil Died DownGPBUSD: chance of a drop is still thereGold Stopped GrowingBrent oil price to drop down to $50Pound Handled the Brexit with DignityUSDCAD rises to 7-week high above 1.3200
Quotes / Sun 18 / April / 04:49pm

Bitcoin and Gold Prices Diverge Again, Extending 5-Month Correlation. Bitcoin is again feeling the pull of gravity
Markets roll back after last week decline, EURUSD tests the important resistance. Market focus Holidays in the U. S. and
What is crypto-currency in simple words?.   Crypto-currency is electronic virtual or digital money.
How to make money OUT of crypto-currency?How to earn bitcoin?What is bitcoin in simple words?How to buy a bitcoin?
Economic calendar / Sunday 18 / April / 07:49pm