EURUSD has been underperforming in the past two days, breaking the almost four-month old ascending trend line to the downside. The price reached an eight-week low around 1.1019, distancing itself from the Ichimoku cloud and the short-term moving averages in the daily timeframe. 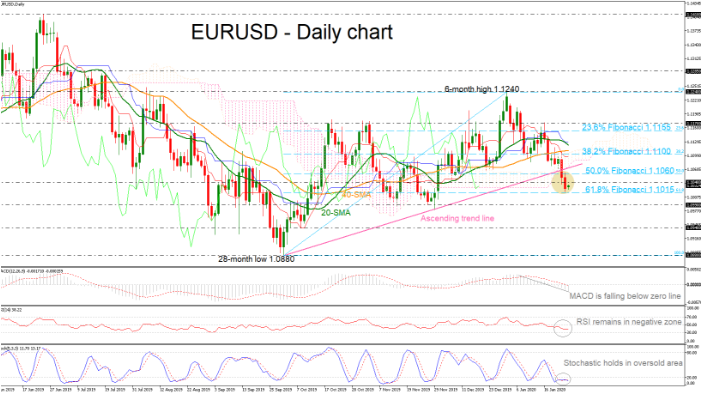 Momentum indicators are pointing to a negative bias in the short term as the RSI is hovering above its 30 oversold mark but below 50 and the stochastic oscillator is flattening in the bearish territory, both confirming the recent downward movement in the price.  Also, the MACD is strengthening its momentum to the downside below the trigger and zero lines.

Further losses should see the 61.8% Fibonacci retracement level of the upleg from 1.0880 to 1.1240 near 1.1015. A significant drop below this area could open the door for the 1.0990 support, taken from the lows on November 27, while lower the price could hit the 1.0940 region, shifting the medium-term outlook from neutral to bearish.

Overall, EURUSD seems ready for a downside run following the penetration of the rising trend line.

Oil Under the Gun Again. On Monday morning, a barrel of Brent is
Euro Completely Recovered Its February Losses. On Monday, March 2nd, the major currency pair
How long to the parity for EURUSD?. EURUSD price is continuing to decrease. The last
Correctional Rebound in Oil Died DownGPBUSD: chance of a drop is still thereGold Stopped GrowingBrent oil price to drop down to $50Pound Handled the Brexit with DignityUSDCAD rises to 7-week high above 1.3200
Quotes / Fri 26 / February / 09:58pm

Bitcoin and Gold Prices Diverge Again, Extending 5-Month Correlation. Bitcoin is again feeling the pull of gravity
Markets roll back after last week decline, EURUSD tests the important resistance. Market focus Holidays in the U. S. and
What is crypto-currency in simple words?.   Crypto-currency is electronic virtual or digital money.
How to make money OUT of crypto-currency?How to earn bitcoin?What is bitcoin in simple words?How to buy a bitcoin?
Economic calendar / Saturday 27 / February / 12:58am