GBPJPY breached the tentative long-term descending trendline drawn from the 2018 peak of 156.59 and geared up to a nine-month high of 147.94 on Friday before pulling back to the 143.00 region. 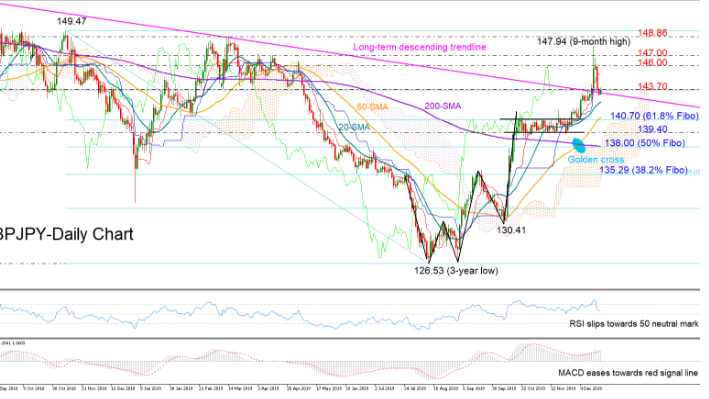 The trendline is currently acting as support as the price is pushing efforts to rebound and the RSI and the MACD are flagging a positive-to-neutral short-term bias, with the former fluctuating not far above its 50 neutral mark and the latter easing towards its red signal line.

A significant bounce off the line and a closure above the 143.70 barrier would resume confidence on the market’s uptrend, shifting attention towards the 146.00 level, which the bulls failed to officially move out of the way last week despite piercing it. Should they succeed to finish above that obstacle this time, the 147.00 mark could come in defense, while higher the rally could hit a stronger wall around 148.86 if the 9-month high of 147.94 proves fragile.

Alternatively, if the price retreats under the trendline and the 143.00 number, the 20-day simple moving average (SMA) could provide immediate support before the spotlight turns to the 140.70 barrier, which is the 61.8% Fibonacci of the downleg from 149.47 to 126.53 and the upper bound of the October-November sideways move. Lower, the bottom of the range at 139.40 will also be closely watched as any decisive step below that block could trigger a steeper sell-off, bringing the 50% Fibonacci of 138.00 and the 200-day SMA first into view.

Meanwhile in the medium-term window, the positive outlook turned brighter after Friday’s rally. A downside reversal below the 38.2% Fibonacci of 135.29 would put the market back into a neutral path. However, with the 50- and the 200-day SMAs maintaining their bullish cross, such a scenario may come with a delay.

In brief, short-term signals are currently looking positive but weaker in the GBPJPY market, while the medium-term picture is viewed as strongly bullish.

Oil Under the Gun Again. On Monday morning, a barrel of Brent is
Euro Completely Recovered Its February Losses. On Monday, March 2nd, the major currency pair
How long to the parity for EURUSD?. EURUSD price is continuing to decrease. The last
Correctional Rebound in Oil Died DownGPBUSD: chance of a drop is still thereGold Stopped GrowingBrent oil price to drop down to $50Pound Handled the Brexit with DignityUSDCAD rises to 7-week high above 1.3200
Quotes / Sun 18 / April / 06:28pm

Bitcoin and Gold Prices Diverge Again, Extending 5-Month Correlation. Bitcoin is again feeling the pull of gravity
Markets roll back after last week decline, EURUSD tests the important resistance. Market focus Holidays in the U. S. and
What is crypto-currency in simple words?.   Crypto-currency is electronic virtual or digital money.
How to make money OUT of crypto-currency?How to earn bitcoin?What is bitcoin in simple words?How to buy a bitcoin?
Economic calendar / Sunday 18 / April / 09:28pm