GBPJPY has been on the sidelines since mid-December but has been refusing to enter the Ichimoku cloud, with the RSI and the MACD suggesting that the indecisive mood may stretch into the short-term as both indicators appear muted near their neutral levels. 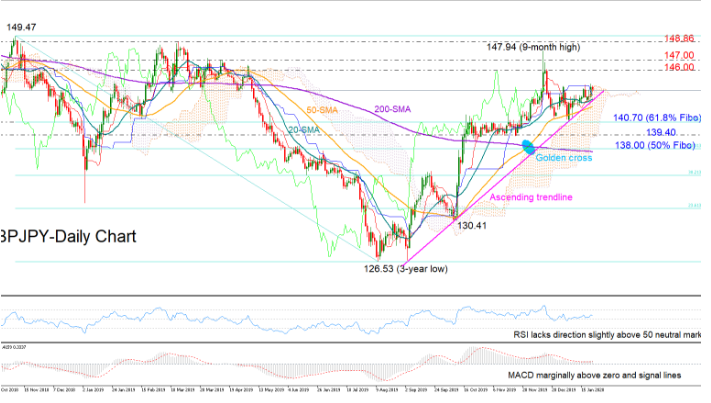 The pair, however, also seems to be well supported by an ascending trendline drawn from the 3-year low of 126.53 and any decisive close below it could initiate fresh selling pressure, probably towards the 140.70 restrictive level, which is also the 61.8% Fibonacci of the 149.47-126.53 downleg. Slightly lower, the 139.40 handle paused downside corrections in the October-November period and will be closely watched, while beneath that, the 50% Fibonacci of 138.00 and the 200-day simple moving average (SMA) could be the next target.

In case the bulls take control, the 146.00 and 147.00 numbers could stand tall as in previous sessions. If not, then the rally may extend to test the 148.86-149.47 strong resistance region, where any significant violation would shift the bigger picture from neutral to positive.

The rising 50-day SMA which has registered a golden cross with the 200-day SMA is an encouraging sign that the current uptrend may strengthen.

In brief, GBPJPY is expected to follow a sideways path in the short-term, with traders keeping a close eye on the ascending trendline for any steeper downfalls.

Oil Under the Gun Again. On Monday morning, a barrel of Brent is
Euro Completely Recovered Its February Losses. On Monday, March 2nd, the major currency pair
How long to the parity for EURUSD?. EURUSD price is continuing to decrease. The last
Correctional Rebound in Oil Died DownGPBUSD: chance of a drop is still thereGold Stopped GrowingBrent oil price to drop down to $50Pound Handled the Brexit with DignityUSDCAD rises to 7-week high above 1.3200
Quotes / Fri 26 / February / 09:42pm

Bitcoin and Gold Prices Diverge Again, Extending 5-Month Correlation. Bitcoin is again feeling the pull of gravity
Markets roll back after last week decline, EURUSD tests the important resistance. Market focus Holidays in the U. S. and
What is crypto-currency in simple words?.   Crypto-currency is electronic virtual or digital money.
How to make money OUT of crypto-currency?How to earn bitcoin?What is bitcoin in simple words?How to buy a bitcoin?
Economic calendar / Saturday 27 / February / 12:42am