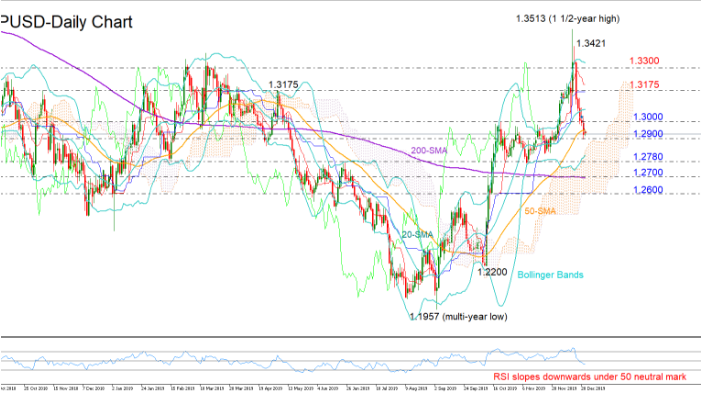 The short-term outlook keeps looking cloudy as the price has crossed below the middle Bollinger band but has yet to touch the lower band, while the RSI is also making its way down below its 50 neutral mark.

Should the sell-off strengthen beneath the 1.2900 level that acted as support on Monday, the door would open for the lower Bollinger band which currently hovers near the 1.2780 area. Slightly lower, the 200-day SMA which is flattening around the 1.2700 mark may next come in focus. If it fails to hold, then attention will shift to 1.2600.

On the upside, the market should improve back above 1.3000 to bring some buyers back into the game. In this case, resistance could run up to 1.3175, where any break higher could see a retest of the 1.3300 level.

Meanwhile in the medium-term picture, the pair maintains a bullish profile reflected by the higher highs and higher lows from the 1.1957 trough despite the recent sharp downfall. A decline under 1.2780 would prove that the uptrend is fragile.

In brief, the bearish mood in GBPUSD may stay in place in the short-term, while in the medium-term bullish sentiment could deteriorate if the market weakens below 1.2780.

Oil Under the Gun Again. On Monday morning, a barrel of Brent is
Euro Completely Recovered Its February Losses. On Monday, March 2nd, the major currency pair
How long to the parity for EURUSD?. EURUSD price is continuing to decrease. The last
Correctional Rebound in Oil Died DownGPBUSD: chance of a drop is still thereGold Stopped GrowingBrent oil price to drop down to $50Pound Handled the Brexit with DignityUSDCAD rises to 7-week high above 1.3200
Quotes / Mon 19 / April / 02:40am

Bitcoin and Gold Prices Diverge Again, Extending 5-Month Correlation. Bitcoin is again feeling the pull of gravity
Markets roll back after last week decline, EURUSD tests the important resistance. Market focus Holidays in the U. S. and
What is crypto-currency in simple words?.   Crypto-currency is electronic virtual or digital money.
How to make money OUT of crypto-currency?How to earn bitcoin?What is bitcoin in simple words?How to buy a bitcoin?
Economic calendar / Monday 19 / April / 05:40am