GBPUSD returned to the red zone and near a key support area around 1.25 after attempting to recover during the past three sessions. Chances for a meaningful rally in the short-term are currently viewed as minimal as the market action continues to take place comfortably below the simple moving averages (SMA) and the Ichimoku cloud, while the RSI and the MACD are lacking a clear direction while in the bearish area. 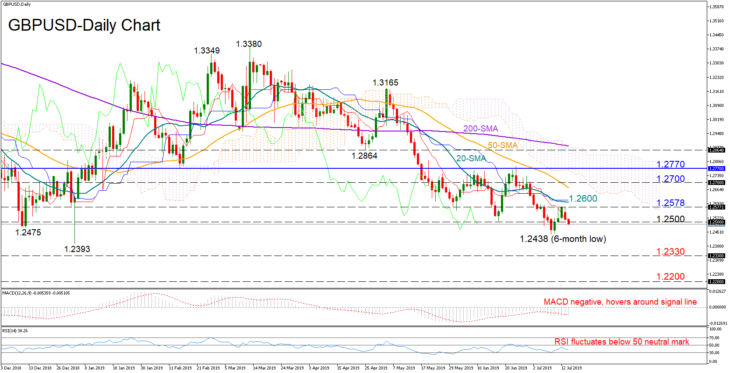 Should the bears clear the 1.25 barrier, the focus will shift immediately towards the six-month low of 1.2438. Breaking decisively below the latter, the sell-off could extend until the 1.2330 number, where any violation would open the way towards the 1.22 psychological level.

Alternatively a strong rebound above the recent peak of 1.2578 and more importantly higher than the 20-day SMA (1.2600) could return some buying confidence, with the price probably crawling next up to 1.2700. Higher, the bulls would need to beat a taller wall between 1.2770-1.2780 for the rally to pick up steam.

In the medium-term picture, the sentiment turned even more bearish following this month’s price discount. A steeper rally is now required for the price to reach the April trough of 1.2864, where any close higher would shift the outlook to neutral.

In brief, GBPUSD is facing a bearish bias both in the short and the medium-term.

Oil Under the Gun Again. On Monday morning, a barrel of Brent is
Euro Completely Recovered Its February Losses. On Monday, March 2nd, the major currency pair
How long to the parity for EURUSD?. EURUSD price is continuing to decrease. The last
Correctional Rebound in Oil Died DownGPBUSD: chance of a drop is still thereGold Stopped GrowingBrent oil price to drop down to $50Pound Handled the Brexit with DignityUSDCAD rises to 7-week high above 1.3200
Quotes / Sat 17 / April / 05:15am

Bitcoin and Gold Prices Diverge Again, Extending 5-Month Correlation. Bitcoin is again feeling the pull of gravity
Markets roll back after last week decline, EURUSD tests the important resistance. Market focus Holidays in the U. S. and
What is crypto-currency in simple words?.   Crypto-currency is electronic virtual or digital money.
How to make money OUT of crypto-currency?How to earn bitcoin?What is bitcoin in simple words?How to buy a bitcoin?
Economic calendar / Saturday 17 / April / 08:15am