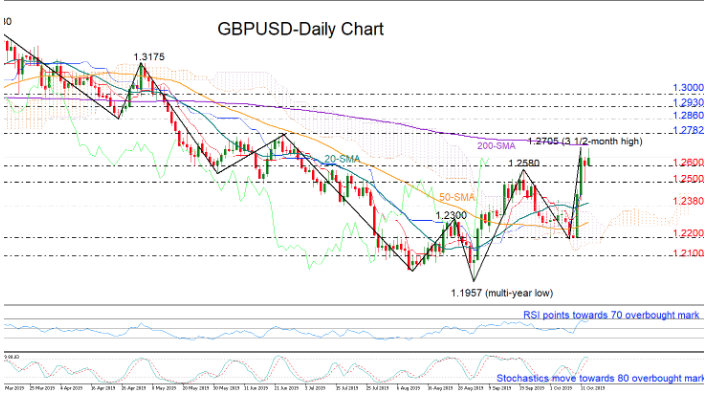 The short-term momentum indicators suggest a cautiously bullish bias as the RSI and the Stochastics maintain an upward direction not far below the overbought territory.

Regarding the market trend, however, technical signals are more optimistic since the pair has created a higher high around 1.2580 and a higher low at 1.2200, violating the downtrend started in mid-March. The bullish cross between the 20- and 50-day SMAs is also hinting that the upward tendency in the price may hold in the short-term.

Alternatively, a closing price below 1.2600 could open the door for the 1.2500 mark, which if breached may bring more downside pressure towards 1.2380 taken from the lows on July 17. Beneath the latter, the next key support could be detected somewhere between 1.2200 and 1.2100.

Meanwhile in the three-month picture, the sentiment turned slightly positive after Friday’s rally. Should the 50-day SMA show an upward reversal more clearly , the odds for an outlook upgrade could increase.

Summarizing, GBPUSD buyers are expected to trade more cautiously in the short-term, while keeping the upward move 1.1957 in play.

Oil Under the Gun Again. On Monday morning, a barrel of Brent is
Euro Completely Recovered Its February Losses. On Monday, March 2nd, the major currency pair
How long to the parity for EURUSD?. EURUSD price is continuing to decrease. The last
Correctional Rebound in Oil Died DownGPBUSD: chance of a drop is still thereGold Stopped GrowingBrent oil price to drop down to $50Pound Handled the Brexit with DignityUSDCAD rises to 7-week high above 1.3200
Quotes / Mon 12 / April / 07:33pm

Bitcoin and Gold Prices Diverge Again, Extending 5-Month Correlation. Bitcoin is again feeling the pull of gravity
Markets roll back after last week decline, EURUSD tests the important resistance. Market focus Holidays in the U. S. and
What is crypto-currency in simple words?.   Crypto-currency is electronic virtual or digital money.
How to make money OUT of crypto-currency?How to earn bitcoin?What is bitcoin in simple words?How to buy a bitcoin?
Economic calendar / Monday 12 / April / 10:33pm