Gold attempts to approach the 1500 level!

Gold appears to be attempting to try and break the triangle in the daily chart. It’s now pulling back from the 1400 horizontal support level that has been actively tested for two consecutive weeks. It could be assumed that gold could touch the 1500 level, considering that the handle of a triangle is present, which also serves as a pennant:

The psychological 1400 level coincides with the broken trend line of an uptrend, away from which the price of gold could potentially get support and jump upwards:

The currency pair EUR/GBP closely approached the descending triangle and is actively testing it. We could assume that the asset may pull back down:

Based on the latest reports by COT CFTC, large operators have been slowly shortening long positions week after week. As for now, the operators entered a negative zone which could indirectly signify a potential price drop: 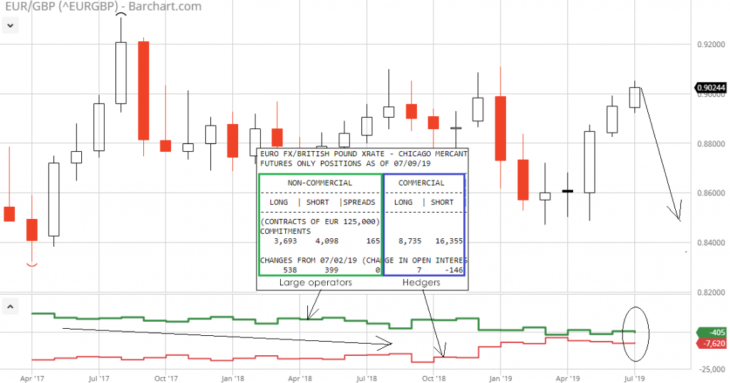 Oil Under the Gun Again. On Monday morning, a barrel of Brent is
Euro Completely Recovered Its February Losses. On Monday, March 2nd, the major currency pair
How long to the parity for EURUSD?. EURUSD price is continuing to decrease. The last
Correctional Rebound in Oil Died DownGPBUSD: chance of a drop is still thereGold Stopped GrowingBrent oil price to drop down to $50Pound Handled the Brexit with DignityUSDCAD rises to 7-week high above 1.3200
Quotes / Wed 03 / March / 05:04am

Bitcoin and Gold Prices Diverge Again, Extending 5-Month Correlation. Bitcoin is again feeling the pull of gravity
Markets roll back after last week decline, EURUSD tests the important resistance. Market focus Holidays in the U. S. and
What is crypto-currency in simple words?.   Crypto-currency is electronic virtual or digital money.
How to make money OUT of crypto-currency?How to earn bitcoin?What is bitcoin in simple words?How to buy a bitcoin?
Economic calendar / Wednesday 03 / March / 08:04am