Gold is reviving bullish momentum after an almost flat week, with the precious metal finally looking for a closure above the four-month old restrictive descending trendline that is part of a downward sloping channel before the Christmas and New Year’s festivities begin. 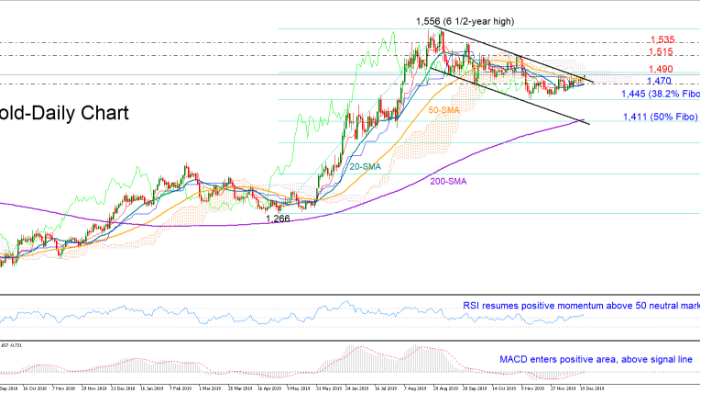 The RSI and the MACD are endorsing the positive move in the price (also in the 4-hour chart) as the former is resuming its upside direction above its 50 neutral mark and the latter is trying to expand above its signal and zero lines.

In the negative scenario, a downside reversal below the descending trendline and the 1,470 level where the 20-day simple moving average (SMA) currently flattens, could see a retest of the 38.2% Fibonacci of 1,445. Falling lower, the bears would aim for the bottom of the downward-sloping channel and the 200-day SMA – both located around the 50% Fibonacci of 1,411.

Looking at the three-month picture, the yellow metal is still slippery, making lower highs and lower lows. A break above 1,515 could increase speculation that the downtrend may be nearing an end, while a drop under 1,445 would enhance the bearish outlook.

Summarizing, gold seems to be at the start of a bullish wave. A closure above the Ichimoku cloud could confirm the improving sentiment in the short-term, while in the three-month picture, a rally above 1,515 is required to downgrade the negative outlook.

Oil Under the Gun Again. On Monday morning, a barrel of Brent is
Euro Completely Recovered Its February Losses. On Monday, March 2nd, the major currency pair
How long to the parity for EURUSD?. EURUSD price is continuing to decrease. The last
Correctional Rebound in Oil Died DownGPBUSD: chance of a drop is still thereGold Stopped GrowingBrent oil price to drop down to $50Pound Handled the Brexit with DignityUSDCAD rises to 7-week high above 1.3200
Quotes / Sun 18 / April / 06:49pm

Bitcoin and Gold Prices Diverge Again, Extending 5-Month Correlation. Bitcoin is again feeling the pull of gravity
Markets roll back after last week decline, EURUSD tests the important resistance. Market focus Holidays in the U. S. and
What is crypto-currency in simple words?.   Crypto-currency is electronic virtual or digital money.
How to make money OUT of crypto-currency?How to earn bitcoin?What is bitcoin in simple words?How to buy a bitcoin?
Economic calendar / Sunday 18 / April / 09:49pm