Gold looks to be forming a triangle after a neutral week

Gold continued to trade along the downward-sloping trend-line following the negative breakout of an ascending channel, despite closing neutral last week. 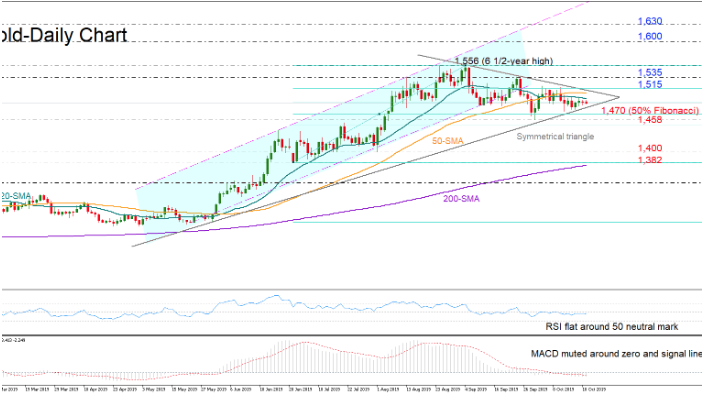 Traders may maintain neutral behavior in the short-term according to the flattening RSI and MACD, probably keeping the market below the descending trend-line as the bearish crossover between the 20- and 50-day simple moving averages suggests.

However, questions are rising about whether the bears are strong enough to violate the new support line drawn from May’s troughs that  looks to be part of a symmetrical triangle.

In the medium-term picture, gold continues to point upwards as long as it trades above 1,382.

Summarizing, the short-term bias is viewed as neutral-to-bearish, though the price seems to be fulfilling a symmetrical triangle and any breakout could determine the next direction in the market.

Oil Under the Gun Again. On Monday morning, a barrel of Brent is
Euro Completely Recovered Its February Losses. On Monday, March 2nd, the major currency pair
How long to the parity for EURUSD?. EURUSD price is continuing to decrease. The last
Correctional Rebound in Oil Died DownGPBUSD: chance of a drop is still thereGold Stopped GrowingBrent oil price to drop down to $50Pound Handled the Brexit with DignityUSDCAD rises to 7-week high above 1.3200
Quotes / Fri 07 / May / 10:58am

Bitcoin and Gold Prices Diverge Again, Extending 5-Month Correlation. Bitcoin is again feeling the pull of gravity
Markets roll back after last week decline, EURUSD tests the important resistance. Market focus Holidays in the U. S. and
What is crypto-currency in simple words?.   Crypto-currency is electronic virtual or digital money.
How to make money OUT of crypto-currency?How to earn bitcoin?What is bitcoin in simple words?How to buy a bitcoin?
Economic calendar / Friday 07 / May / 01:58pm