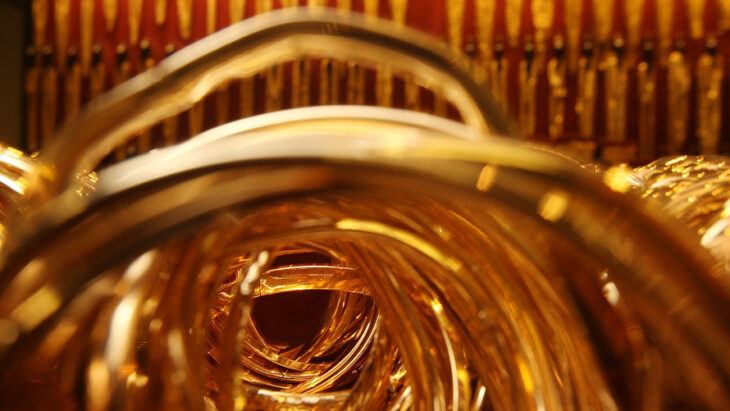 Gold’s gains last week came after a Fed meeting in which the central bank held rates steady but spoke of “uncertainties” over the U.S. economic outlook. The European Central Bank and Bank of England also made dovish comments last week. Precious metals like gold tend to attract buyers in a low interest-rate climate.

But geopolitical tensions between the U.S. and Iran and uncertainties over the global trade front have also lured investors into gold, seen as a haven investment in times of political and economic uncertainty.

Global equities rose cautiously Monday after China’s state-run Xinhua news agency said Sunday that China’s President Xi Jinping will attend the G-20 summit in Japan this week, giving the first official confirmation of his attendance at the meeting, where he has been expected to talk on the sidelines with U.S. President Donald Trump.

Over the weekend Trump said he would impose new sanctions on Iran starting Monday, days after calling a halt to airstrikes on the country which shot down a U.S. military drone. But he also suggested the two countries will eventually have a positive relationship, toning down harsher rhetoric he has employed for much of his presidency.

Oil Under the Gun Again. On Monday morning, a barrel of Brent is
Euro Completely Recovered Its February Losses. On Monday, March 2nd, the major currency pair
How long to the parity for EURUSD?. EURUSD price is continuing to decrease. The last
Correctional Rebound in Oil Died DownGPBUSD: chance of a drop is still thereGold Stopped GrowingBrent oil price to drop down to $50Pound Handled the Brexit with DignityUSDCAD rises to 7-week high above 1.3200
Quotes / Sun 18 / April / 07:11pm

Bitcoin and Gold Prices Diverge Again, Extending 5-Month Correlation. Bitcoin is again feeling the pull of gravity
Markets roll back after last week decline, EURUSD tests the important resistance. Market focus Holidays in the U. S. and
What is crypto-currency in simple words?.   Crypto-currency is electronic virtual or digital money.
How to make money OUT of crypto-currency?How to earn bitcoin?What is bitcoin in simple words?How to buy a bitcoin?
Economic calendar / Sunday 18 / April / 10:11pm