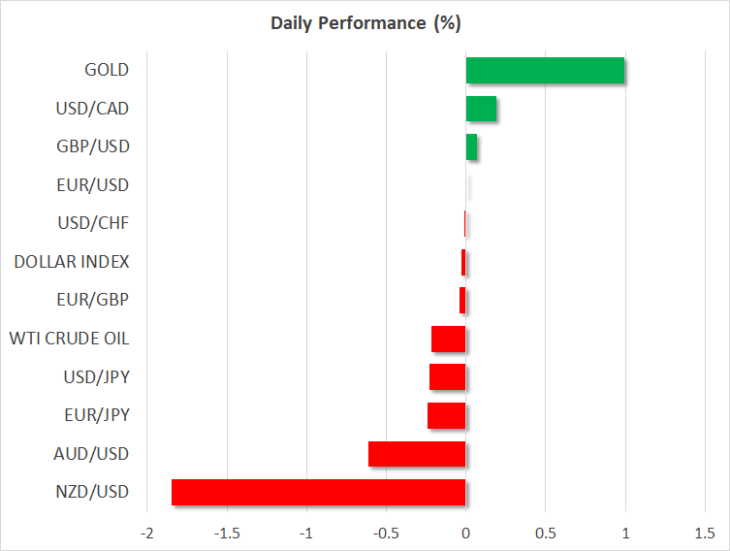 The Reserve Bank of New Zealand surprised markets on Wednesday by delivering a hefty 50-bps cut in its official cash rate (OCR), confounding analysts and traders who were expecting a smaller 25-bps cut. This takes the OCR to a record low of 1.00%, sending the yield on New Zealand’s 10-year government bonds plummeting to an all-time low of 1.148%.

Investors are now pricing a more than 70% probability that the RBNZ will cut again in November. The RBNZ’s aggressive move has fuelled bets that the RBA will also want to stay ahead of the curve by cutting rates further. Only yesterday, the RBA struck a more dovish tone when it held rates unchanged at its policy meeting.

Both the Australian and New Zealand dollars have fallen by about 5.5% versus their US counterpart in their latest downswing that began on July 19. Unless the US Federal Reserve also signals that it too will start cutting rates more aggressively, the aussie and kiwi’s near-term outlook is unlikely to turn positive anytime soon.

The Chinese yuan came back under selling pressure on Wednesday, easing to around 7.04 per dollar in onshore trade, after the People’s Bank of China set a slightly weaker midpoint from Tuesday’s fixing. The slide unnerved investors as a further depreciation in the yuan risks triggering an even tougher response from the Trump administration, who on Monday decided to label China a ‘currency manipulator’ for facilitating the drop in the exchange rate.

This gave rise to some safe-haven demand, pulling the yen and Swiss franc higher from yesterday’s lows, though the moves were limited as there was evidence Chinese authorities were trying to stem the yuan’s decline. Reports suggested Chinese state banks were carrying out buy-sell swaps in the onshore market to put a squeeze on dollar supply to curb yuan short selling.

The US dollar was about 0.2% down versus the yen at 106.20, with the kiwi being the worst performer against the Japanese currency, tumbling by 2%. The yen’s strength comes despite the publication today of the Bank of Japan’s Summary of Opinions of the July meeting that shows growing support for more stimulus by policymakers.

The latest stock market rout appears to be easing after Wall Street’s strong performance overnight. The S&P 500 closed up 1.3%, ending a six-day losing streak. Major indices in Asia were mostly positive, though Chinese shares gave up earlier gains. But a positive start in Europe points to a broad but limited improvement in risk appetite.

Risk sentiment was lifted late yesterday from comments by the White House economic advisor Larry Kudlow, who said the US still intends to hold talks with Chinese trade negotiators in September, rekindling hopes that tensions could yet abate.

The optimism wasn’t strong enough, however, to ease expectations of sharp Fed rate cuts and gold continued to climb to fresh 6-year highs, fast approaching the $1490 an ounce level.

Oil Under the Gun Again. On Monday morning, a barrel of Brent is
Euro Completely Recovered Its February Losses. On Monday, March 2nd, the major currency pair
How long to the parity for EURUSD?. EURUSD price is continuing to decrease. The last
Correctional Rebound in Oil Died DownGPBUSD: chance of a drop is still thereGold Stopped GrowingBrent oil price to drop down to $50Pound Handled the Brexit with DignityUSDCAD rises to 7-week high above 1.3200
Quotes / Mon 12 / April / 07:23pm

Bitcoin and Gold Prices Diverge Again, Extending 5-Month Correlation. Bitcoin is again feeling the pull of gravity
Markets roll back after last week decline, EURUSD tests the important resistance. Market focus Holidays in the U. S. and
What is crypto-currency in simple words?.   Crypto-currency is electronic virtual or digital money.
How to make money OUT of crypto-currency?How to earn bitcoin?What is bitcoin in simple words?How to buy a bitcoin?
Economic calendar / Monday 12 / April / 10:23pm