Markets in mayhem as US hits China with new tariffs 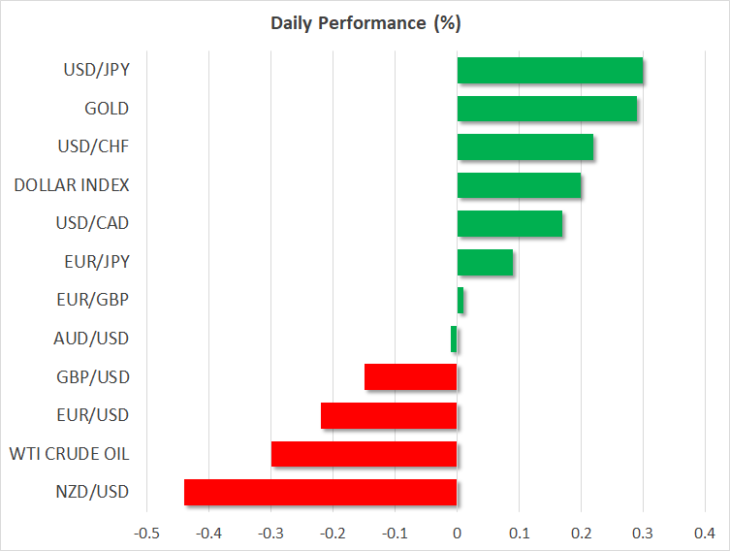 Trade fears continue to wreak havoc in global markets, with risk aversion making a sharp comeback on Friday after Washington and Beijing exchanged another round of retaliatory tariffs, escalating the trade war to a whole new level. China responded to the previously announced US tariffs – that will take effect on September 1 – by introducing tariffs of its own on $75bn of American goods.

This retaliation infuriated the US President, who hit back immediately on Twitter by “ordering” American companies to “immediately start looking for an alternative to China”. Trump didn’t stop there though. A few hours later, he upped the stakes again by declaring that the US will raise its tariffs on all Chinese products by another 5%.

Markets reacted violently, with US stocks falling by around 2.5% and gold reaching a fresh six-year high earlier today. In the FX universe, the yen briefly soared to a new three-year high against the US dollar, with the greenback taking a heavy hit as the escalation raised the odds for aggressive Fed easing in the coming months.

Yet, the situation has calmed down a little on Monday. Safe havens are giving back some of their gains and stocks are recovering ground, after Trump said that China called the US negotiators yesterday and wants to come back to the negotiating table. That headline lifted sentiment, even though Beijing denied it a few minutes later.

Admittedly, even if such a call took place, it’s not a game changer. Actions speak louder than words in this high-stakes poker game between the world’s two largest economies and in this sense, the latest explosion in tensions allows very little scope for any real compromises without one side losing face. In fact, further escalation seems very likely, as China is almost certain to retaliate to Trump’s latest tariffs. Hence, waves of risk aversion may become an even more frequent phenomenon, keeping haven assets in high demand.

The highly anticipated speech by Fed chief Jay Powell on Friday proved relatively uneventful, even if his comments were a shade more dovish than previously. Notably, Powell did not repeat the phrase that rate cuts are merely a “mid-cycle adjustment”, which implicitly opens the door to a more prolonged easing cycle. That was hardly a surprise for investors though, so the market reaction was relatively muted.

Instead, the dollar fell sharply following the gloomy trade news, though it has recovered part of those losses today. The market is clearly saying that single most important variable for Fed policy right now is how the trade war plays out – which seems like a fair judgement.

As for today, US durable goods orders for July will be in focus. This indicator is seen as gauge of capital investment by companies, so it may attract special attention amid the trade conflict and a slowing global economy. Any signs that firms are putting their investment plans on ice until the trade uncertainty dissipates could make investors more confident that the Fed will act with force to “sustain the expansion”.

Oil Under the Gun Again. On Monday morning, a barrel of Brent is
Euro Completely Recovered Its February Losses. On Monday, March 2nd, the major currency pair
How long to the parity for EURUSD?. EURUSD price is continuing to decrease. The last
Correctional Rebound in Oil Died DownGPBUSD: chance of a drop is still thereGold Stopped GrowingBrent oil price to drop down to $50Pound Handled the Brexit with DignityUSDCAD rises to 7-week high above 1.3200
Quotes / Mon 12 / April / 07:29pm

Bitcoin and Gold Prices Diverge Again, Extending 5-Month Correlation. Bitcoin is again feeling the pull of gravity
Markets roll back after last week decline, EURUSD tests the important resistance. Market focus Holidays in the U. S. and
What is crypto-currency in simple words?.   Crypto-currency is electronic virtual or digital money.
How to make money OUT of crypto-currency?How to earn bitcoin?What is bitcoin in simple words?How to buy a bitcoin?
Economic calendar / Monday 12 / April / 10:29pm