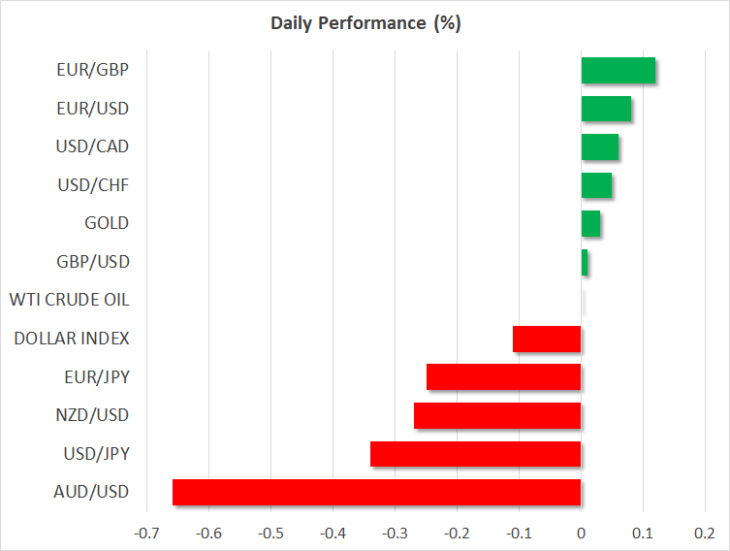 There were no surprises from overnight decisions by the Federal Reserve and the Bank of Japan as the US central bank cut its benchmark rate by 25 basis points as expected, while the BoJ kept policy unchanged. However, the Fed painted a confused picture about the rate outlook as policymakers appear divided about the expected path of interest rates.

Only 7 out of 17 FOMC members see one more cut for 2019, with 5 forecasting rates to stay on hold. But 5 members predicted a rate hike before year-end. The outlook for 2020 was just as split with the median forecast indicating rates would stay at their current level.

The US dollar initially rose on the Fed’s statement as markets were hoping the Fed would signal deeper cuts. However, in his press conference, Chairman Jerome Powell reassured investors that the central bank is “prepared to be aggressive” if it turns out to be appropriate.

His remarks put a cap on the dollar’s gains before coming under pressure from the Bank of Japan’s policy announcement. The BoJ kept policy steady but signals about possible action at the October meeting were not enough to keep the yen from pushing higher.  The Japanese currency is the biggest gainer this morning as some traders were disappointed that the Bank didn’t announce any changes today or gave strong enough hints of substantial easing at the next meeting.

A last-minute rebound on Wall Street helped Asian stocks open on a steady note on Thursday with Chinese shares reversing earlier losses and Japan’s Nikkei 225 index posting gains of 0.4% despite the stronger yen. But equity futures point to a cautious start for US indices later today.

With the Fed and BoJ meetings over, traders will next be taking their cues from deputy-level trade talks between the US and China as well as the People’s Bank of China’s rate decision on Friday.

US and Chinese negotiators will be meeting over the next two days to try and bridge their differences ahead of high-level talks in early October. With risk appetite still fragile, markets are likely to overreact to any negative developments. Chinese investors will also be sensitive to the PBOC’s announcement tomorrow as a cut in its newly created Loan Prime Rate is being predicted.

In the more immediate term, the Bank of England meeting will be in focus later today as policymakers remain in the dark about the outcome of Brexit. The BoE is expected to keep rates unchanged and will probably stick to its tightening bias even as inflation falls sharply. The pound came under pressure on Wednesday after UK CPI fell unexpectedly to 1.7% y/y in August. A bigger concern for investors, though, could be the decision by Britain’s Supreme Court on whether the government’s decision to prorogue Parliament was lawful, which is expected in the coming days.

Sterling was steady ahead of the BoE announcement, hovering around $1.2475, while the Swiss franc was firmer, jumping 0.6% versus the dollar after the Swiss National Bank kept rates on hold at its meeting today.

The Australian dollar stood out as one of the worst performers on Thursday as the currency fell steeply on disappointing jobs numbers out of Australia. Although overall employment rose more than expected in August, a big drop in full-time jobs and an increase in the jobless rate led investors to sharply adjust their expectations of a rate cut by the Reserve Bank of Australia at the next meeting in October. Futures markets are now showing about a 65% probability of a 25-bps cut in October, up from around 25% just a week ago.

The aussie slipped to a two-week low of $0.6777, pressuring the kiwi, which also hit two-week lows on expectations the Reserve Bank of New Zealand will too cut rates in one of its upcoming meetings. GDP data out of New Zealand this morning were slightly better than anticipated, with the economy expanding by 0.5% over the second quarter. But this wasn’t enough to convince traders that the RBNZ won’t ease again. 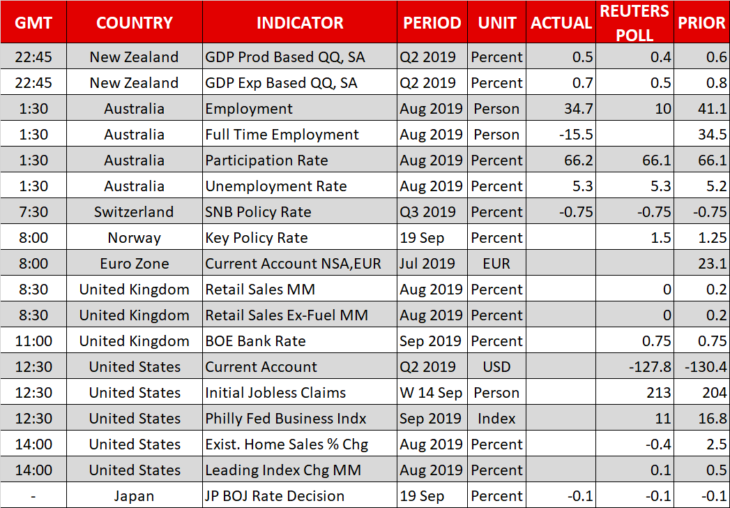 Oil Under the Gun Again. On Monday morning, a barrel of Brent is
Euro Completely Recovered Its February Losses. On Monday, March 2nd, the major currency pair
How long to the parity for EURUSD?. EURUSD price is continuing to decrease. The last
Correctional Rebound in Oil Died DownGPBUSD: chance of a drop is still thereGold Stopped GrowingBrent oil price to drop down to $50Pound Handled the Brexit with DignityUSDCAD rises to 7-week high above 1.3200
Quotes / Sun 18 / April / 05:46pm

Bitcoin and Gold Prices Diverge Again, Extending 5-Month Correlation. Bitcoin is again feeling the pull of gravity
Markets roll back after last week decline, EURUSD tests the important resistance. Market focus Holidays in the U. S. and
What is crypto-currency in simple words?.   Crypto-currency is electronic virtual or digital money.
How to make money OUT of crypto-currency?How to earn bitcoin?What is bitcoin in simple words?How to buy a bitcoin?
Economic calendar / Sunday 18 / April / 08:46pm