Oil prices fell on Monday in Asia after Iran said an emergency meeting on its 2015 nuclear deal was constructive. 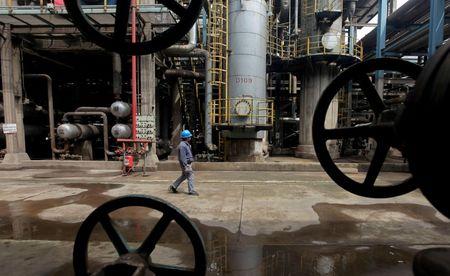 “The atmosphere was constructive. Discussions were good. I cannot say that we resolved everything, I can say there are lots of commitments,” Araqchi, the senior Iranian nuclear negotiator, told reporters on Sunday.

However, citing Araqchi, Reuters reported that Tehran might continue to reduce its nuclear commitments if European fail to salvage the pact.

Oil markets inched up last week, with WTI ended the week up just 0.5% while the Brent 1.0%.

Looking ahead, commodities traders will focus on the upcoming Federal Reserve meeting due on July 30-31. Markets expect the Fed to cut rates by at least 25 basis points at the meeting.

U.S. July jobs report, due on Friday, and other macroeconomic data including the China manufacturing and non-manufacturing PMIs on Wednesday are also expected to receive some focus.

On the Sino-U.S. trade front, Chinese and U.S. officials will meet Tuesday for two days of trade talks, according to reports. It is suggested neither side is expecting much hope for a breakthrough.

Oil Under the Gun Again. On Monday morning, a barrel of Brent is
Euro Completely Recovered Its February Losses. On Monday, March 2nd, the major currency pair
How long to the parity for EURUSD?. EURUSD price is continuing to decrease. The last
Correctional Rebound in Oil Died DownGPBUSD: chance of a drop is still thereGold Stopped GrowingBrent oil price to drop down to $50Pound Handled the Brexit with DignityUSDCAD rises to 7-week high above 1.3200
Quotes / Sat 17 / April / 05:45am

Bitcoin and Gold Prices Diverge Again, Extending 5-Month Correlation. Bitcoin is again feeling the pull of gravity
Markets roll back after last week decline, EURUSD tests the important resistance. Market focus Holidays in the U. S. and
What is crypto-currency in simple words?.   Crypto-currency is electronic virtual or digital money.
How to make money OUT of crypto-currency?How to earn bitcoin?What is bitcoin in simple words?How to buy a bitcoin?
Economic calendar / Saturday 17 / April / 08:45am