Oil soars after Saudi attacks; yen and gold up too 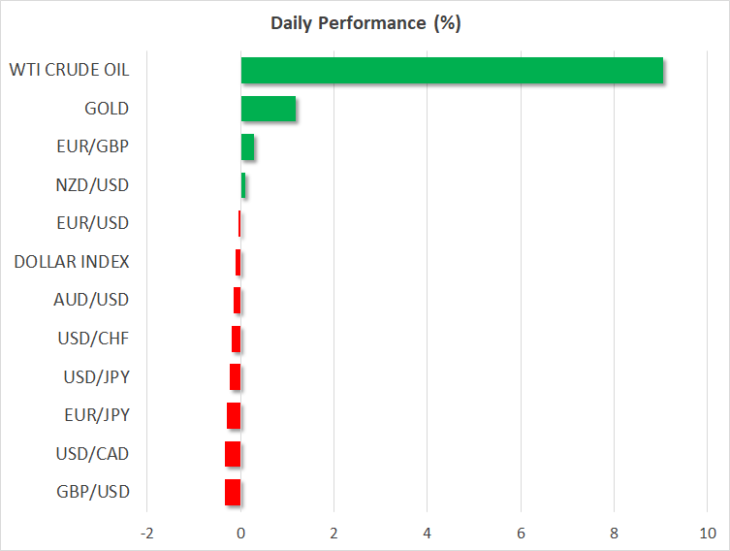 Crude oil prices skyrocketed on Monday, recording their biggest intra-day gain since 1991 after Houthi rebels in Yemen carried out drone and cruise missile strikes on two major Saudi Arabian oil processing plants. The attack on the critical facilities has cut off 50% of Saudi Arabia’s oil output, which is about 5% of global production.

Brent crude oil initially jumped by about 19.5% to a 4-month peak before easing to around $66 a barrel to stand 9% higher on the day. WTI futures also fell back from their earlier spike and were last up 8.1% at $59.29 a barrel.

But the impact was felt beyond the energy markets as safe have assets such as the yen, the Swiss franc and gold, as well as government bonds firmed on the back of the increased risk aversion as the attacks not only have repercussions for global oil supply but also on geopolitical tensions.

The United States suspects Iran is behind the attacks and not the Houthi rebels who have claimed responsibility. President Trump tweeted the US is “locked and loaded depending on verification” to respond to the attacks on its Middle East ally, raising the prospect of a military conflict with Iran.

The stronger yen pushed the US dollar to as low as 107.47 yen at the start of trading on Monday, having ended Friday above the 108 level, while gold jumped by 1% to reclaim the $1,500/ounce level. Oil-linked currencies were also lifted, with the Canadian dollar reversing some of Friday’s losses to almost break below the C$1.32 per dollar handle.

But it wasn’t just the escalation in tensions in the Middle East that weighed on markets on Monday as the latest economic indicators out of China have revived growth jitters for the world’s second largest economy.

Industrial production in China rose at the slowest pace in 17½-years in August, rising by just 4.4% year-on-year. Retail sales also grew by less than expected, prompting the country’s Vice Premier Li Keqiang to say that it will be “very difficult” for the economy to grow more than 6% and possibly suggesting the government may miss its annual growth target of between 6-6.5%.

The China-sensitive Australian dollar slipped slightly against its US counterpart but held near last week’s 1½-month highs, though against the safe-haven yen, it was down a more substantial 0.3% at 74.17 yen.

Traders will be awaiting employment data out Australia on Thursday for clues about the timing for the next rate cut by the Reserve Bank of Australia. Any disappointment in the closely watched data is likely to cut short the aussie’s upswing versus the dollar.

Similarly, Q2 GDP numbers from New Zealand due later this week could decide how soon the Reserve Bank of New Zealand will cut rates again. Investors remain deeply bearish about the New Zealand dollar, whose recent rebound has already started to lose steam.

The pound rallied sharply last week to briefly peak above $1.25 after Johnson made a fresh push to kick-start the stalled Brexit talks and signalled that “a huge amount of progress is being made”. But his claim has been rejected by EU officials and traders will be eagerly awaiting the outcome of today’s talks as Johnson continues to insist that he will not apply for an extension to the Brexit deadline despite being required by law to do so.

In the absence of any notable progress, the pound could retreat further, although support could arrive from UK data due later this week as well as from the Bank of England policy meeting on Thursday, which is expected to maintain its tightening bias.

The Federal Reserve and Bank of Japan will also be meeting this week and markets will be hoping for pledges of more stimulus to counter a slowing global economy.

Oil Under the Gun Again. On Monday morning, a barrel of Brent is
Euro Completely Recovered Its February Losses. On Monday, March 2nd, the major currency pair
How long to the parity for EURUSD?. EURUSD price is continuing to decrease. The last
Correctional Rebound in Oil Died DownGPBUSD: chance of a drop is still thereGold Stopped GrowingBrent oil price to drop down to $50Pound Handled the Brexit with DignityUSDCAD rises to 7-week high above 1.3200
Quotes / Sun 18 / April / 05:06pm

Bitcoin and Gold Prices Diverge Again, Extending 5-Month Correlation. Bitcoin is again feeling the pull of gravity
Markets roll back after last week decline, EURUSD tests the important resistance. Market focus Holidays in the U. S. and
What is crypto-currency in simple words?.   Crypto-currency is electronic virtual or digital money.
How to make money OUT of crypto-currency?How to earn bitcoin?What is bitcoin in simple words?How to buy a bitcoin?
Economic calendar / Sunday 18 / April / 08:06pm