PBOC’s gold purchases – a signaling function for the markets?

Official data for May showed that the Chinese Central Bank continued to diversify its portfolio of assets, reducing investments in US government bonds and increasing physical volumes of gold. This trend has continued for the seventh month in a row, creating questions about the motives of such a policy in the context of a trade standoff with the United States.

Firstly, it is worth noting that the PBOC announces its intentions, in particular about purchases of gold, in an inconstant and delayed manner. However, the last few months have been characterized by quite timely updates on the state of gold and foreign exchange reserves. The true gold reserves of the Chinese Central Bank remain the subject of debate.

There is a widespread view that, apart from the de-dollarization trend, an increase in gold investments performs a signal function for the markets, indicating the stability of the yuan in the long term. In contrast, the US gold reserves have remained unchanged for many years, at approximately 8.1 thousand tons:

In May, the PBOC bought about 10 tons of gold, while over the past 6 months, the volume of reserves increased by 74 tons. It is noteworthy that, due to the sharp increase in gold prices in recent months, the nominal value of reserves has increased to a maximum level for the last 4 years. 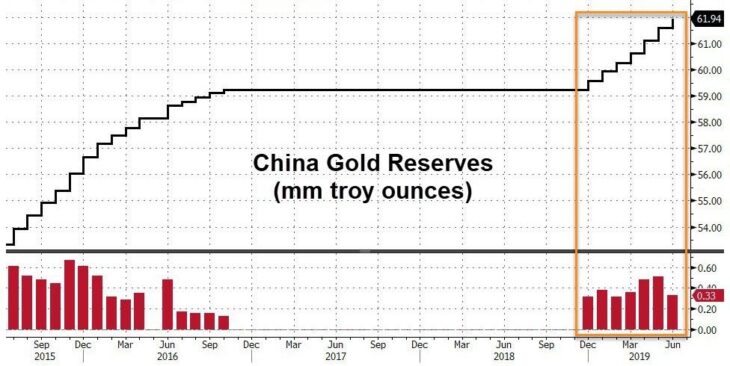 The devaluation of the yuan against the dollar is accompanied by an increase in the price of XAUCNY, in the phases of the intensification of the trade conflict:

However, the most interesting point is a fairly consistent policy to diversify reserves, namely, replacing investments in Treasuries with gold. In addition, private demand for gold in China could also increase. 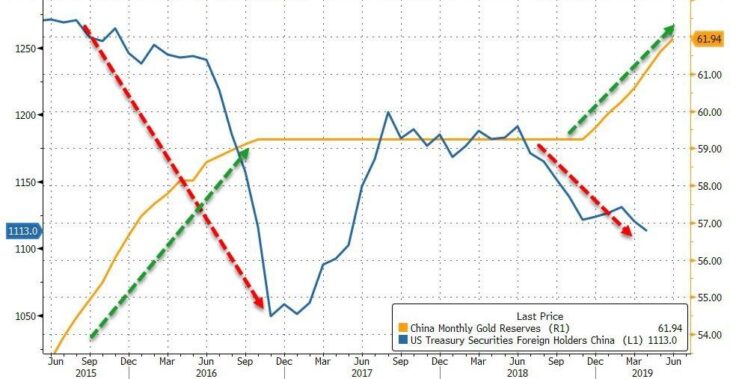 Oil Under the Gun Again. On Monday morning, a barrel of Brent is
Euro Completely Recovered Its February Losses. On Monday, March 2nd, the major currency pair
How long to the parity for EURUSD?. EURUSD price is continuing to decrease. The last
Correctional Rebound in Oil Died DownGPBUSD: chance of a drop is still thereGold Stopped GrowingBrent oil price to drop down to $50Pound Handled the Brexit with DignityUSDCAD rises to 7-week high above 1.3200
Quotes / Fri 26 / February / 10:07pm

Bitcoin and Gold Prices Diverge Again, Extending 5-Month Correlation. Bitcoin is again feeling the pull of gravity
Markets roll back after last week decline, EURUSD tests the important resistance. Market focus Holidays in the U. S. and
What is crypto-currency in simple words?.   Crypto-currency is electronic virtual or digital money.
How to make money OUT of crypto-currency?How to earn bitcoin?What is bitcoin in simple words?How to buy a bitcoin?
Economic calendar / Saturday 27 / February / 01:07am