Throughout the past week, the US dollar has received support after strengthening expectations that the Fed will take an extended break after three consecutive rate cuts. For a week, the chances that the rate will remain unchanged until the middle of next year jumped from 30% to 62%. Such a revaluation caused an increase in the yield of US government bonds and returned investor interest in American assets. The dollar strengthening was based on three simultaneous factors: a series of relatively good data, the Fed’s confidence in the economy, and hopes that easing trade tariffs would jump-start the economy growth in the coming months.

The stock market, meanwhile, updated its highs, building on expectations of the imminent signing of a trade agreement. However, as we warned earlier last week, that it is precarious to rely on hopes of trade progress. On Friday, the markets turned lower after Trump’s comments that he did not promise tariff reductions. It may well turn out that by the end of last week, markets reached a boiling point. The movement of US stock indexes have become more wild: changes at half a per cent occur in a matter of hours. Several technical indicators shows that the US stock market is overbought, which increases the chances of a corrective pullback. 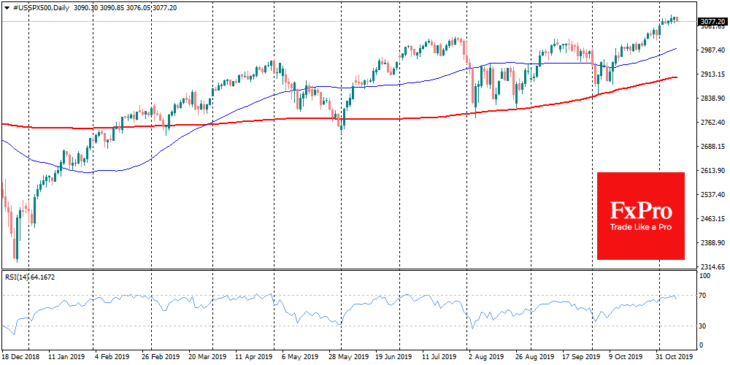 Similar slippage is noted in the dollar. The dollar index is losing 0.1% since the start of trading on Monday after strengthening by 1.2% over the past week. The dollar is cautiously backing off peaks, losing one of its recent growth drivers. Nevertheless, it is worth taking a broader look at the foreign exchange market to understand: the dollar often grows when the stock market weakens. The same thing can happen this time. Concerns over long-term growth often raise demand for defensive assets.

Chinese Yuan on Friday and Monday morning returned to the area above 7.00. The Japanese yen – also an important indicator of demand for profitable assets – returned below 109 on Monday morning after peak levels near 109.50 at the end of last week. AUDUSD is also pulling back from its local highs, providing further confirm from the forex, that markets are likely to have passed their local peak of trade-deal optimism.

Oil Under the Gun Again. On Monday morning, a barrel of Brent is
Euro Completely Recovered Its February Losses. On Monday, March 2nd, the major currency pair
How long to the parity for EURUSD?. EURUSD price is continuing to decrease. The last
Correctional Rebound in Oil Died DownGPBUSD: chance of a drop is still thereGold Stopped GrowingBrent oil price to drop down to $50Pound Handled the Brexit with DignityUSDCAD rises to 7-week high above 1.3200
Quotes / Mon 12 / April / 06:44pm

Bitcoin and Gold Prices Diverge Again, Extending 5-Month Correlation. Bitcoin is again feeling the pull of gravity
Markets roll back after last week decline, EURUSD tests the important resistance. Market focus Holidays in the U. S. and
What is crypto-currency in simple words?.   Crypto-currency is electronic virtual or digital money.
How to make money OUT of crypto-currency?How to earn bitcoin?What is bitcoin in simple words?How to buy a bitcoin?
Economic calendar / Monday 12 / April / 09:44pm