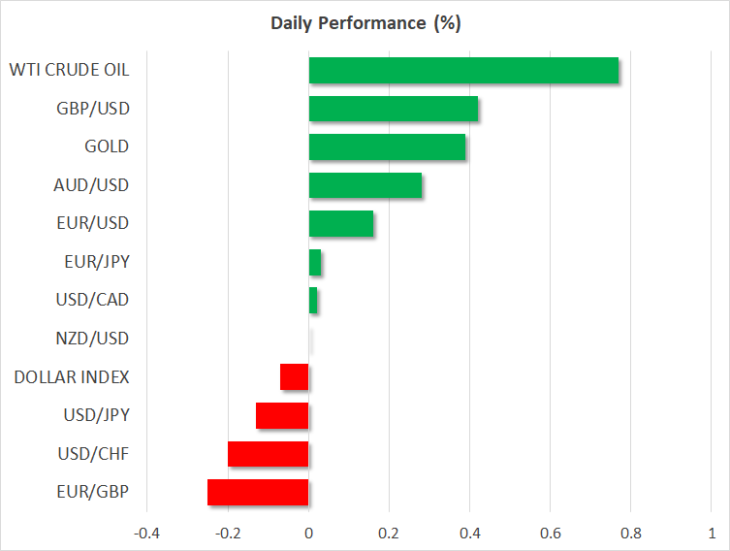 Hopes that the United Kingdom and the European Union may yet reach a deal on their divorce terms boosted the pound on Friday, taking the currency to 2½-month highs versus the dollar. In an interview for Sky News, European Commission President Jean-Claude Juncker said “we can have a deal”, and also indicated that the backstop can be dropped if the UK was able to come up with an alternative that met all the objectives of the backstop.

In a further encouraging sign, Britain submitted written proposals for an alternative solution, pointing to progress. Brexit is expected to dominate the headlines today as well as the UK Brexit Secretary Stephen Barclay will meet the EU’s chief negotiator, Michel Barnier in Brussels.

The pound has been in a bullish mode since early September as the combination of Parliament blocking a no-deal Brexit and renewed efforts by the British government to resolve the backstop issue have significantly reduced the near-term risks for the British economy.

However, with the global economy slowing and trade frictions potentially dragging on, the Bank of England was less optimistic about the outlook for the UK economy in its policy statement yesterday, hinting that a rate hike is not certain if the uncertainties become more entrenched.

Dollar on the backfoot as Treasury yields slip

The US dollar remained under pressure versus the Japanese yen and the Swiss franc following the Bank of Japan’s and the Swiss National Bank’s decisions to keep their policies unchanged, in contrast to the Federal Reserve’s decision to cut rates for the second straight meeting on Wednesday. The greenback was last trading at 107.80 yen and at 0.9900 francs, declining sharply from its mid-week peaks.

A raft of better-than-expected data, including robust housing figures, out of the United States on Thursday failed to provide much support.

But the data and a somewhat hawkish Fed weren’t enough to put an end to the downtrend in US Treasury yields, which have been declining all week. The strong demand for Treasuries is possibly a sign of investor caution following the escalation of tensions in the Middle East and the US-China mid-level trade talks that resumed in Washington on Thursday.

An interim trade deal on the way?

While the fact that the US and China are talking again is positive and negotiations are expected to continue next week, a full agreement seems some distance away. Although at this point, markets might be happy with just an interim deal if those reports prove to be correct – particularly about more agricultural exports from the US to China. But with President Trump reportedly being willing to raise tariffs as high as 50% and 100%, there’s plenty of uncertainty surrounding the talks.

In the meantime, traders will seek direction from Fed policymaker as New York Fed President John Williams is due to speak at 12:15 GMT and Boston Fed President Eric Rosengren (a hawkish dissenter in the last Fed meeting) will make a speech at 15:20 GMT.

Oil prices jumped by more than 1% after a Saudi-led military coalition launched military strikes on Houthi rebels in north Yemen early on Friday. The strikes come just days after Saudi Arabia’s largest oil processing facility was the target of a drone and missile attack, with Iran suspected to be behind it. Any further escalation in the region could see oil prices shoot up again, having only just pulled back from a 20% surge.

Oil Under the Gun Again. On Monday morning, a barrel of Brent is
Euro Completely Recovered Its February Losses. On Monday, March 2nd, the major currency pair
How long to the parity for EURUSD?. EURUSD price is continuing to decrease. The last
Correctional Rebound in Oil Died DownGPBUSD: chance of a drop is still thereGold Stopped GrowingBrent oil price to drop down to $50Pound Handled the Brexit with DignityUSDCAD rises to 7-week high above 1.3200
Quotes / Sat 17 / April / 04:40am

Bitcoin and Gold Prices Diverge Again, Extending 5-Month Correlation. Bitcoin is again feeling the pull of gravity
Markets roll back after last week decline, EURUSD tests the important resistance. Market focus Holidays in the U. S. and
What is crypto-currency in simple words?.   Crypto-currency is electronic virtual or digital money.
How to make money OUT of crypto-currency?How to earn bitcoin?What is bitcoin in simple words?How to buy a bitcoin?
Economic calendar / Saturday 17 / April / 07:40am