Pound stumbles, franc and yen up as Johnson aims for hard Brexit

UK Prime Minister Boris Johnson used his post-election Queen’s speech yesterday to unveil his Brexit agenda and reintroduce the Withdrawal Agreement bill to Parliament with some changes. The revised bill has all the indications of a ‘hard’ Brexit as the Prime Minister removed sections on the protection of workers’ rights, signalling divergence from EU rules, and on giving Parliament a say in the negotiations on the future relationship with the EU.

Lawmakers are expected to begin voting at 14:30 GMT and the bill could complete its legislative journey through Parliament by the middle of next month before the January 31 deadline.

But while this is likely to offer some relief to the markets as it marks the start of the end to three and a half years of Brexit limbo, investors were nevertheless unnerved by the latest developments as it brings Brexit a step closer to reality. It also increases the likelihood of a looser post-Brexit relationship with the EU than what the markets would have wished for, even if a no-deal scenario is averted.

The pound extended its weekly slide to more than 2% yesterday, briefly falling below the key $1.30 level, though it was steadier today around $1.3020. A not-so-dovish Bank of England yesterday was unable to provide much support to the battered pound as an unexpected slump in November retail sales kept the door wide open for a rate cut in 2020.

Elsewhere in the markets, the mood was a bit more sanguine as investors looked forward to being greeted by a US-China trade deal in the New Year. US Treasury Secretary Steven Mnuchin told reporters on Thursday that the preliminary agreement was “completely finished” and is undergoing another translation, before adding, “We’ll sign the agreement in the beginning of January.”

US stocks cheered the prospect of an imminent conclusion to the ‘phase one’ deal with all three major indices on Wall Street closing at yet another record high. However, shares in Asia were mostly in the red, giving up earlier gains, as they struggled to sustain the December rally.

Renewed Brexit jitters also threatened to spoil the party and Johnson’s hardline stance drove up demand for safe havens on Thursday. The Swiss franc surged to a four-month higher versus the US dollar and a one-month top against the euro. But both the franc and yen were softer today, with most major pairs moving in tight ranges and the Australian dollar outperforming its peers for a second day.

US personal income and spending data coming up

The dollar was little changed on Friday, hovering around 109.35 yen, as investors awaited the last batch of major data to come out of the United Stated in 2019. Personal income and spending numbers, due at 15:00 GMT, will be watched for clues as to whether consumption can continue to support US growth. The Fed’s preferred inflation gauge, the core PCE price index, will be released at the same time as well and is expected to stay unchanged at 1.6% year-on-year, below the 2% target.

Traders will also be keeping an eye on Canadian retail sales figures at 13:30 GMT following Wednesday’s somewhat stronger-than-expected inflation data, which pushed the loonie to 7-week highs versus the greenback. 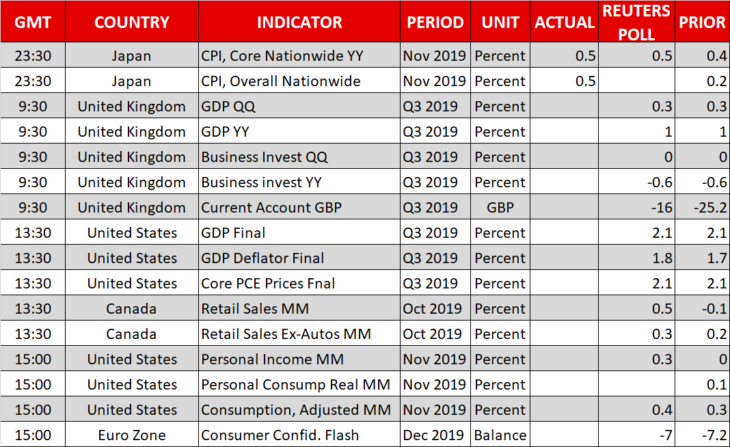 Oil Under the Gun Again. On Monday morning, a barrel of Brent is
Euro Completely Recovered Its February Losses. On Monday, March 2nd, the major currency pair
How long to the parity for EURUSD?. EURUSD price is continuing to decrease. The last
Correctional Rebound in Oil Died DownGPBUSD: chance of a drop is still thereGold Stopped GrowingBrent oil price to drop down to $50Pound Handled the Brexit with DignityUSDCAD rises to 7-week high above 1.3200
Quotes / Mon 19 / April / 04:05am

Bitcoin and Gold Prices Diverge Again, Extending 5-Month Correlation. Bitcoin is again feeling the pull of gravity
Markets roll back after last week decline, EURUSD tests the important resistance. Market focus Holidays in the U. S. and
What is crypto-currency in simple words?.   Crypto-currency is electronic virtual or digital money.
How to make money OUT of crypto-currency?How to earn bitcoin?What is bitcoin in simple words?How to buy a bitcoin?
Economic calendar / Monday 19 / April / 07:05am