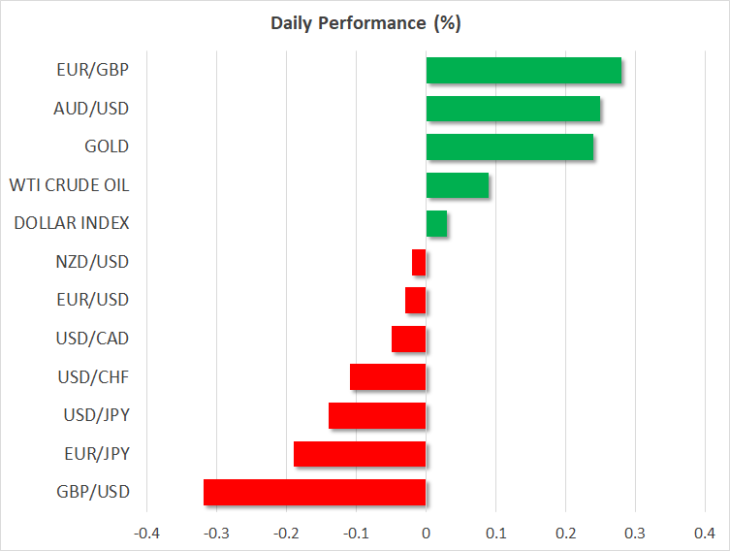 Growing signs that more governments and central banks around the worlds are taking measures to support their economies remained the main market driver on Tuesday. Most major indices in Asia closed around 1% higher, following similar gains on Wall Street overnight, though Chinese shares lost some steam after yesterdays’ strong rally, and US and European equity futures were pointing to a flat open.

Risk appetite was lifted yesterday from news over the weekend that China is reforming one of its key interest rates and that Germany is preparing a fiscal package to support the economy should it slip into recession.

China has followed up its announcement of the reforms by today cutting the Loan Prime Rate (LPR) to 4.25%, putting it 10 basis points below the official one-year benchmark rate, which the LPR is replacing for setting rates for loans to customers.

There’s also hopes of a fiscal boost in the United States amid reports that the White House is considering temporary payrolls tax cuts to cushion the economy from the global slowdown. Meanwhile, there was relief that the Trump administration renewed the license for Huawei to do business with some US companies by another 90 days, despite opposition from the President for the Chinese telecom giant to get any reprieve.

The dollar index, which measures the US currency against a basket of six rivals, was heading towards a three-week high, touching 98.40 in early European trading. The prospect of major stimulus in China and Germany, as well as possibly in the United States has lifted government bond yields globally. The yield on 10-year Treasury notes has bounced up to around 1.58% from last week’s three-year low of 1.475%, helping the greenback recover from its August trough.

But with markets once again getting carried away with the pace of expected rate cuts by the Federal Reserve, there’s a risk the dollar could climb even higher if Fed chief Jerome Powell doesn’t deliver a dovish enough speech when he addresses the Jackson Hole Economic Symposium on Friday. An appreciating dollar is likely to anger President Trump even more who yesterday called on the Fed to lower rates by 100 basis points.

But so far, there’s few indications the Fed is about to make another dramatic dovish tilt. In fact, further rate cuts could meet stronger resistance within the Federal Open Market Committee (FOMC). Boston Fed President Eric Rosengren, who was one of two dissenters against a rate cut at the July meeting, signalled he wasn’t ready to favour looser monetary policy just yet in an interview with Bloomberg yesterday.

The Australian dollar was one of the few gainers on Tuesday, rising by around 0.25% versus its US counterpart. Apart from the improved risk-on mood, the aussie was also boosted from the minutes of the Reserve Bank of Australia’s August meeting, which indicated that further rate cuts would be conditional on additional weakness in growth and inflation.

The euro was flat around $1.1072 as investors awaited the outcome of today’s debate in Parliament of Matteo Savini’s no-confidence motion against the coalition government, which is half comprised by Savlini’s League party. If a no-confidence vote is held and Prime Minister Giuseppe Conte is defeated, it’s likely to trigger more political uncertainty as it would open the prospect of more uncomfortable coalitions.

Oil Under the Gun Again. On Monday morning, a barrel of Brent is
Euro Completely Recovered Its February Losses. On Monday, March 2nd, the major currency pair
How long to the parity for EURUSD?. EURUSD price is continuing to decrease. The last
Correctional Rebound in Oil Died DownGPBUSD: chance of a drop is still thereGold Stopped GrowingBrent oil price to drop down to $50Pound Handled the Brexit with DignityUSDCAD rises to 7-week high above 1.3200
Quotes / Mon 12 / April / 06:25pm

Bitcoin and Gold Prices Diverge Again, Extending 5-Month Correlation. Bitcoin is again feeling the pull of gravity
Markets roll back after last week decline, EURUSD tests the important resistance. Market focus Holidays in the U. S. and
What is crypto-currency in simple words?.   Crypto-currency is electronic virtual or digital money.
How to make money OUT of crypto-currency?How to earn bitcoin?What is bitcoin in simple words?How to buy a bitcoin?
Economic calendar / Monday 12 / April / 09:25pm