Stocks and currencies recover despite the yield curve inversion

The world markets failed to maintain a positive attitude. The U.S. indices lost more than 3% on Wednesday. At the same time, the debt markets did not bounce back with the stocks on the news of the tariff delay. Moreover, debt markets pulled the stock market down. Long-term bond yields are falling. For the first time in history, the yield on the 30-year U.S. Treasury bond declined below 2%. Investors do not believe in long-term growth in the U.S., and a weaker economy would not allow the Fed to raise its rates.

Even more negative headings are connected with the inversion of the yield curve. The yield of ten-year U.S. government bonds declined below the yield of two-year bonds. This is perceived as a signal of an almost imminent recession in the coming months, as over the past 50 years it provided only one false signal of such outcome. The inversion of the yield curve also affected the British debt market, which also further increased the pressure on its stocks.

As the FxPro Analyst Team said, the most dangerous thing in this situation is that market fears of the recession could end up fuelling further demand for safe havens, further intensifying the anxiety of stock markets. 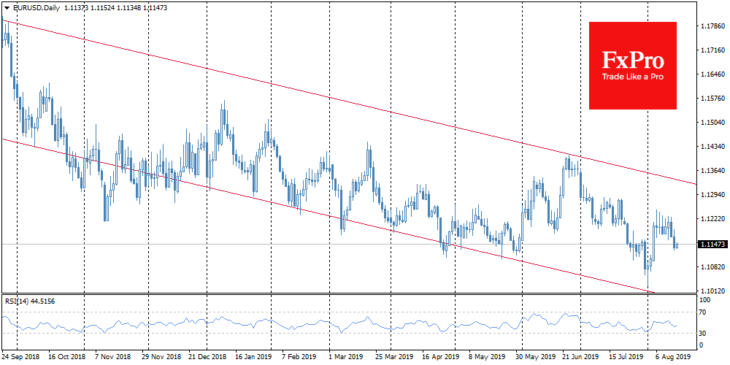 On the other hand, the currency market avoids sharp dynamics. EURUSD slipped from 1.1200 to 1.1150 over the previous two days, while the stock markets have experienced a rather bumpy road. GBPUSD is standing at around 1.2050 for the fifth consecutive trading session. The strengthening of the Japanese yen turned out to be less impressive than the decline the day before, although the pair is often marked by a close correlation with the dynamics of stock markets. 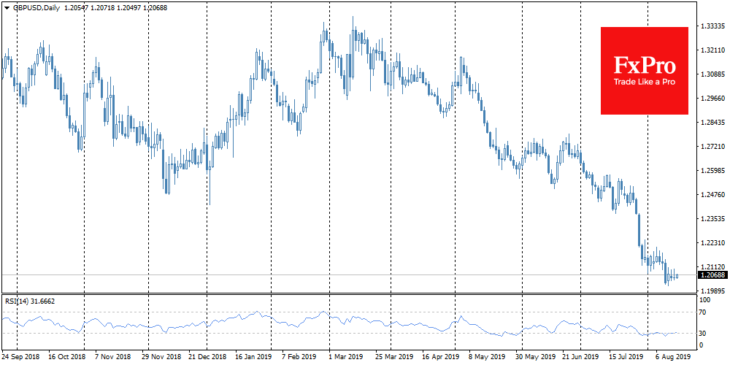 Gold returned to growth, rising to $1520, but failed to rewrite the recent highs. Crude oil also declined under $59 but continues to show a series of higher intraday lows. All these are signs that outside the stock and debt markets, the sentiments are far from panic, which can be a positive signal for trading on Thursday. 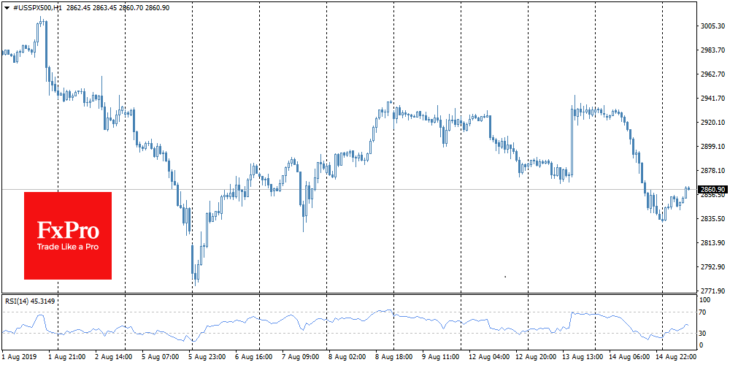 Stock indices in Hong Kong and Shanghai are moving away from local lows, adding about 1.4% during the day. Futures on S&P500 moved away from the lows reached the day before, showing growth of 0.7%.

Thus, there is a very high chance that the markets will recover self-possession, and without any fresh disturbing news, they may well return to cautious buying, offsetting the news about the inversion of the yield curve.

Oil Under the Gun Again. On Monday morning, a barrel of Brent is
Euro Completely Recovered Its February Losses. On Monday, March 2nd, the major currency pair
How long to the parity for EURUSD?. EURUSD price is continuing to decrease. The last
Correctional Rebound in Oil Died DownGPBUSD: chance of a drop is still thereGold Stopped GrowingBrent oil price to drop down to $50Pound Handled the Brexit with DignityUSDCAD rises to 7-week high above 1.3200
Quotes / Sat 17 / April / 05:45am

Bitcoin and Gold Prices Diverge Again, Extending 5-Month Correlation. Bitcoin is again feeling the pull of gravity
Markets roll back after last week decline, EURUSD tests the important resistance. Market focus Holidays in the U. S. and
What is crypto-currency in simple words?.   Crypto-currency is electronic virtual or digital money.
How to make money OUT of crypto-currency?How to earn bitcoin?What is bitcoin in simple words?How to buy a bitcoin?
Economic calendar / Saturday 17 / April / 08:45am