‘Super Mario’ delivers, but not enough to keep euro down 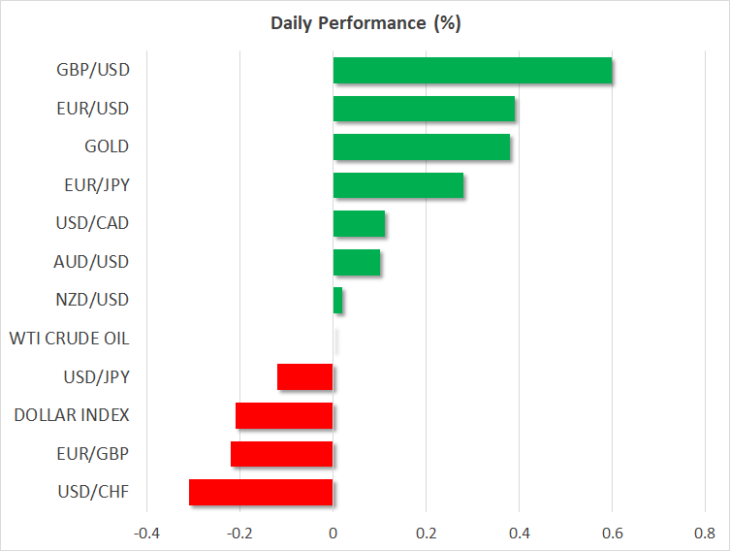 The European Central Bank (ECB) meeting was not short of excitement, with policymakers slashing the deposit rate by 10 basis points to -0.50% and restarting the Quantitative Easing (QE) program at the tune of 20 billion euros per month. Since the rate cut was slightly smaller than expected, the knee-jerk reaction in the euro was higher. However, the single currency retreated to trade lower almost immediately, as investors dug through the details and saw that the QE program will continue “as long as necessary”, effectively making it open-ended.

The euro’s rollercoaster ride didn’t stop there though, as the currency rallied to recoup all its losses and trade much higher once Draghi’s press conference concluded. He repeatedly emphasized the need for fiscal policy to step up, leaving the impression that the ECB also believes monetary policy is largely exhausted. In other words, if he wants fiscal policy to take up the mantle, the ECB may be reluctant to ease aggressively moving forward, which likely explains why the euro ended higher. Enhancing this narrative, a subsequent Reuters report suggested that key ECB officials – from Germany and France – argued against restarting QE altogether.

Is this just a relief rally for the euro, or the beginning of a sea change? At this stage, it looks more like a recovery in a broader downtrend. The euro area economy is suffering mainly at the hands of issues that monetary policy cannot effectively address – this is not a domestic lending or liquidity problem, but rather an investment and exports shock owed to the trade war and Brexit. It’s therefore doubtful that these easing measures will be effective in shoring up the euro area, and until fiscal policy starts doing its part, it is difficult to envision a healthy and sustainable uptrend in the euro.

In this sense, this euro rally may remain relatively short lived, and the trigger for any pullback could be a not-so-dovish rate cut by the Fed next week that pushes the dollar higher (see below).

Global risk appetite was bolstered further yesterday by a Bloomberg report suggesting that Washington is considering an ‘interim’ deal with China that would delay or even roll back some US tariffs for commitments on intellectual property and agricultural purchases. This generated a surge in US stock markets, which are now very close to record highs, while haven currencies like the yen retreated.

Trump later said he would prefer a full deal, but signaled he “would consider” a limited one as well. While markets certainly seem optimistic something like that could take flesh next month, it’s highly questionable whether Beijing would agree to anything unless the White House rolls back all its tariffs – not just some.

Regardless, trade optimism seems as unstoppable as a freight train right now, and in this sense, it wouldn’t be a surprise to see US stock markets break new highs before long. This also begs the question, will the Fed be comfortable slashing rates next week with equities already near record levels, or will financial stability concerns return? Market pricing still suggests that a quarter-point rate cut is a done deal, but elevated asset prices and a more tranquil tone on trade may be just enough for Powell to put a ‘not-so-dovish’ spin on any cut, by pushing back against the need for more near-term action.

US retail sales data out today may shed some more light on this.

Oil Under the Gun Again. On Monday morning, a barrel of Brent is
Euro Completely Recovered Its February Losses. On Monday, March 2nd, the major currency pair
How long to the parity for EURUSD?. EURUSD price is continuing to decrease. The last
Correctional Rebound in Oil Died DownGPBUSD: chance of a drop is still thereGold Stopped GrowingBrent oil price to drop down to $50Pound Handled the Brexit with DignityUSDCAD rises to 7-week high above 1.3200
Quotes / Sat 17 / April / 05:36am

Bitcoin and Gold Prices Diverge Again, Extending 5-Month Correlation. Bitcoin is again feeling the pull of gravity
Markets roll back after last week decline, EURUSD tests the important resistance. Market focus Holidays in the U. S. and
What is crypto-currency in simple words?.   Crypto-currency is electronic virtual or digital money.
How to make money OUT of crypto-currency?How to earn bitcoin?What is bitcoin in simple words?How to buy a bitcoin?
Economic calendar / Saturday 17 / April / 08:36am