President Donald Trump promised the U.K. a “phenomenal trade deal” Tuesday, on the second day of his state visit to Britain.

His comments revealed little detail but added to previous assurances from the U.S. president as Britain slowly edges toward an exit from the EU. 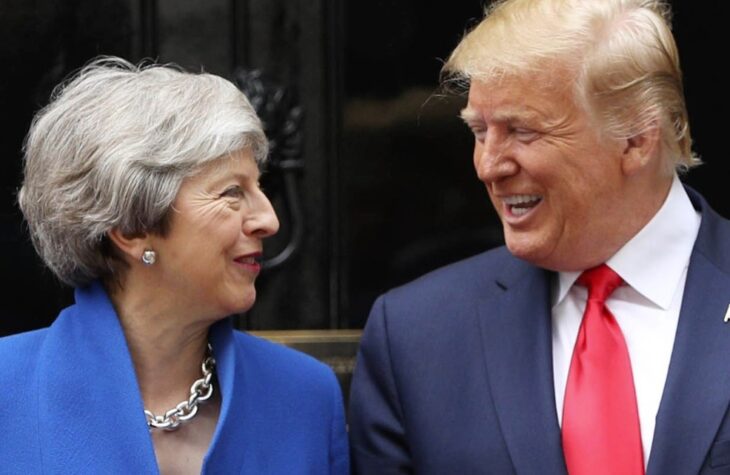 “As the U.K. makes preparations to exit the European Union, the United States is committed to a phenomenal trade deal between the U.S. and the U.K.,” Trump said at a joint press conference with U.K. Prime Minister Theresa May.

“There is tremendous potential in that trade deal — I say probably two and even three times of what we are doing right now,” Trump told reporters after meeting May for talks which lasted an hour.

Trump added that he thought Brexit will happen and should happen, responding to questions on the current impasse in Westminster which has helped to topple May who is stepping down as Conservative Party leader on Friday.

The talks with May on Tuesday involved a variety of contentious topics, which included climate change, trade and tensions with Iran. The U.K. is not allowed to open official trade talks with other nations until it has fully left the bloc.

Oil Under the Gun Again. On Monday morning, a barrel of Brent is
Euro Completely Recovered Its February Losses. On Monday, March 2nd, the major currency pair
How long to the parity for EURUSD?. EURUSD price is continuing to decrease. The last
Correctional Rebound in Oil Died DownGPBUSD: chance of a drop is still thereGold Stopped GrowingBrent oil price to drop down to $50Pound Handled the Brexit with DignityUSDCAD rises to 7-week high above 1.3200
Quotes / Sat 17 / April / 05:07am

Bitcoin and Gold Prices Diverge Again, Extending 5-Month Correlation. Bitcoin is again feeling the pull of gravity
Markets roll back after last week decline, EURUSD tests the important resistance. Market focus Holidays in the U. S. and
What is crypto-currency in simple words?.   Crypto-currency is electronic virtual or digital money.
How to make money OUT of crypto-currency?How to earn bitcoin?What is bitcoin in simple words?How to buy a bitcoin?
Economic calendar / Saturday 17 / April / 08:07am