USDCAD climbs higher but is capped by 20-SMA

USDCAD recorded its third day of gains after a failed attempt to break significantly below the 21-month low of 1.2950 on Tuesday. In the longer-term timeframe, the pair is still moving in a bearish direction. 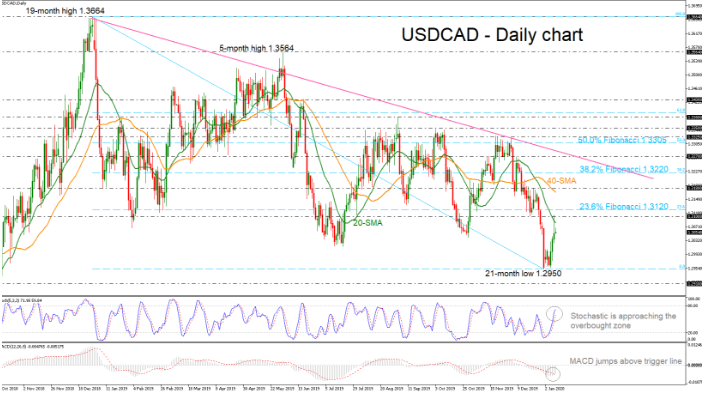 Chances for a short-term reversal are increasing as the stochastic oscillator is approaching its overbought territory. Moreover, the MACD posted a bullish crossover with its trigger line in the bearish area, suggesting a possible upside correction. However, the pair hit the 20-period simple moving average (SMA), which stands near the 1.3100 handle and ended the day below it on Thursday.

In the alternative scenario, a move lower could challenge the 1.2950 support level again. Slightly below this, the 1.2910 barrier, taken from October 2018, could attract traders’ attention before moving sharply lower until the 1.2780 zone, registered on September 2018.

All in all, the price needs a strong push higher to create further gains above 1.3100 in the very short-term.

Oil Under the Gun Again. On Monday morning, a barrel of Brent is
Euro Completely Recovered Its February Losses. On Monday, March 2nd, the major currency pair
How long to the parity for EURUSD?. EURUSD price is continuing to decrease. The last
Correctional Rebound in Oil Died DownGPBUSD: chance of a drop is still thereGold Stopped GrowingBrent oil price to drop down to $50Pound Handled the Brexit with DignityUSDCAD rises to 7-week high above 1.3200
Quotes / Sun 18 / April / 05:53pm

Bitcoin and Gold Prices Diverge Again, Extending 5-Month Correlation. Bitcoin is again feeling the pull of gravity
Markets roll back after last week decline, EURUSD tests the important resistance. Market focus Holidays in the U. S. and
What is crypto-currency in simple words?.   Crypto-currency is electronic virtual or digital money.
How to make money OUT of crypto-currency?How to earn bitcoin?What is bitcoin in simple words?How to buy a bitcoin?
Economic calendar / Sunday 18 / April / 08:53pm